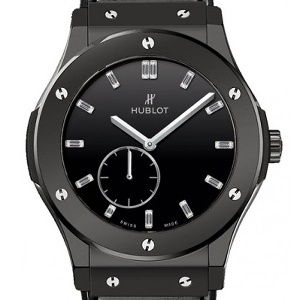 Hublot is a Swiss luxury watchmaker founded in 1980 by Italian Carlo Crocco. The company operates as a wholly owned subsidiary of France's LVMH. In 1980, it also marked the birth of the "Fusion" concept a few months after being founded.

To date, Hublot has 80 Boutiques all over the world. In February 2007, Hublot opened its first mono-brand store in Paris, in the Rue Saint-Honoré. The second was opened in the summer of that year, in the Hôtel Byblos, Saint-Tropez. Today, Hublot has a flagship store on Bond Street, London. Stores in the United States are currently located in Atlanta (Closed permanently), Bal Harbour, Beverly Hills, Boca Raton, Scottsdale, AZ, Dallas, Houston, Las Vegas, New York City, and Palm Beach. In October 2012 they opened their then newest store in Las Vegas preceded by a store in Ulan Bataar, Mongolia.