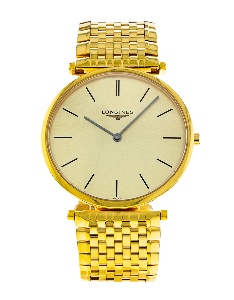 Compagnie des Montres Longines Francillon S.A., or simply Longines, is a Swiss luxury watchmaker based in Saint-Imier, Switzerland. Founded by Auguste Agassiz in 1832, the company has been a subsidiary of the Swiss Swatch Group and its predecessors since 1983. Its winged hourglass logo, which was registered in 1889, is the oldest unchanged yet still active registered trademark.

Longines began using the slogan "Elegance is an Attitude" in 1999. Their previous slogan, "The World's Most Honored Watch" was used for most of the 20th century.

In December 2018, World Wide Fund for Nature (WWF) released an official report giving environmental ratings for 15 major watch manufacturers and jewelers in Switzerland. Longines, along with 7 other manufacturers including Omega, Rolex and Tissot, was given the lowest environmental rating as "Latecomers/Non-transparent", suggesting that the manufacturer has taken very few actions addressing the impact of its manufacturing activities on the environment and climate change.

Today’s Price: $1,020
Notify me when
Any website
Embed code that works on all website platforms.
Copy and paste the following embed code to any section on your pages just before the closing </body> tag of your website template file.
<div class="ws-product" data-id="64641" data-picture="yes"></div><script src="https://watchsignals.com/handler/endpoints.handler.js"></script>
Preview
Price tracking activated.
We'll send you email once price drops.
WatchSignals uses cookies to ensure you get the best experience on our website. By continuing to browse, you agree to our cookie policy.