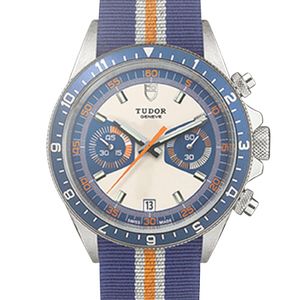 Montres TUDOR SA is a Swiss manufacturer of luxury wristwatches based in Geneva. Registered in 1926 by Hans Wilsdorf, the founder of Rolex SA, the brand remains a sister company to Rolex, both companies being owned by the Hans Wilsdorf Foundation. Over time Tudor became especially well known for its tool watches, producing watches for professional divers and the military. Between the 1960s and 1980s several navies issued Tudor Submariners to their divers, including the US Navy SEALs, and the French Marine Nationale (French Navy).

The first Tudor watches produced in the 1920s and 1930s bore a Tudor signature on the dial, with the horizontal bar of the T lengthened above the other letters. On some rare pieces, the name Rolex also appears. Around 1936, the logo changed to the name in Gothic characters accompanied by a shield bearing the Tudor rose, emblem of the English Tudor dynasty. In 1947, one year after the official launch of Tudor Montres SA, the shield was removed and the rose appeared alone with the brand name. From 1969 only the shield was used. The shield logo remains on all Tudor watches while the rose is now used on the winding crowns.

Tudor watches are marketed and sold in most countries around the world including the United States, Australia, Canada, India, Mexico, South Africa, some countries in Europe, South Asia, the Middle East and countries in South America, particularly Brazil, Argentina and Venezuela. Montres Tudor SA discontinued sales of Tudor-branded watches in the United States in the early 2000s, but Tudor resumed sales US in 2013 and in UK in 2014.