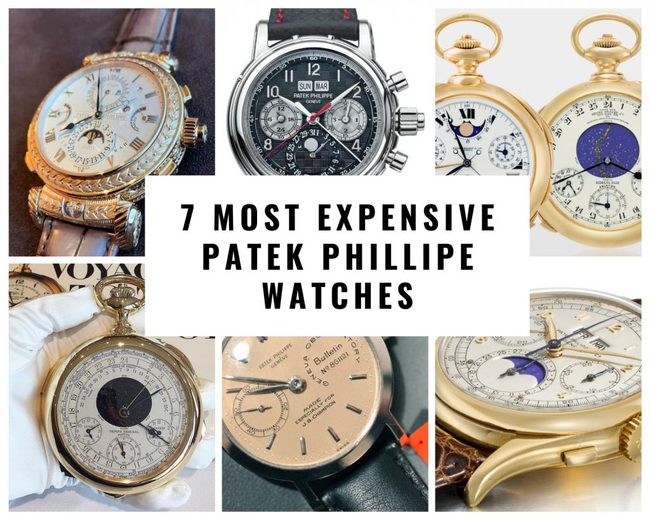 The Reference 5004T was a revival of the previously discontinued 5004 by Patek Philippe. This completely new, unique, and final 5004 was made specifically for the 2013 Only Watch auction. This made it one of the most unique and intriguing watches ever made by Patek Philippe purely for its exclusivity and story.

This was a custom made Reference 2458 Observatory Chronometer made for world class defense attorney J.B Champion. Patek Philippe was commissioned to design this striking COCS certified timepiece and was among one of 700 of Patek Philipe’s Observatory Precision Contest winners and is considered to be one of the most accurate timepieces ever made by the watchmaker.

The Caliber 89 Grand Complication Pocket Watch was first released for the 150th anniversary of the watch maker’s existence. Since being released, this timepiece remains to this day the most complex watch ever made by Patek Philippe. With a staggering 1,728 handcrafted movement parts, 33 complications, and 126 jewels, this watch is truly the magnum opus of a master. Today there are only 4 iterations of this watch ever made, each one unique.

The Reference 1527 Perpetual Calendar 18k in rose gold is among the most mysterious watches to ever appear at auction. This classic Patek Philippe timepiece showed up on auction in 2010, and baffled archivists upon first seeing it. Made during the height of the second World War, this one of a kind timepiece was once the most valuable watch ever sold at auction by Patek Philippe.

This custom Patek Philippe Supercomplication watch once held the title of most complex timepiece for over 60 years. Until it was overtaken by the previously mentioned Patek Philippe pocket watch, this piece was hailed as the standard for complexity and perfection. Made for millionaire banker Henry Graves Jr. This piece holds a special place in the hearts of many luxury watch enthusiasts.

Until recently, this Patek Philippe Grandmaster Chime was the single most expensive watch in the world. This unique Grandmaster Chime 6300A-010 was the first, and only, Grandmaster Chime made of steel. The sheer rarity of this unique piece sparked a bidding war at auction that resulted in the staggering price it has become famous for. That paired with the 20 complications and 1,366 pieces make this one of the most marvelous timepieces ever made.

As of 2020, this breathtaking Grandmaster Chime now holds the record for the most expensive watch in the world. This 20 complication dual-dial watch is the most complex chiming wrist watch ever manufactured. First released in 2014 to honor the 175th anniversary of Patek Philippe, this watch was recently listed on Chrono24 by a seller in Shanghai. The sheer value of the watch is in its unique design, and unobtainable complexity. This truly is a watch without a peer.

Patek Philippe watches are known for being among the most expensive watches in the world. Because of their rarity, complexity, and breathtaking design, this comes no surprise to luxury watch enthusiasts.

The Beginner’s Guide to Buying your First Patek Philippe

Quick Search
Watches less than $5,000 Watches $5,000 - $10,000 Watches $10,000 - $15,000 Watches $15,000 - $20,000 Watches above $20,000 Luxury Watch Reference Numbers
Pre-owned watches Dive watches Gold watches Blue watches Automatic Watches Manual-winding watches Most popular luxury watches models Watches with market price higher than MSRP
Recommended For You See All
Patek Philippe vs Rolex Watches: A Comparison of Two of the World’s Finest Timepieces
Top 10 Most Expensive Pocket Watches Ever Made
A Definitive Guide to Buying Luxury Watches Online
The Beginner’s Guide to Buying your First Patek Philippe
Getting more articles...
stop
stop
stop
stop
See All
WatchSignals uses cookies to ensure you get the best experience on our website. By continuing to browse, you agree to our cookie policy.