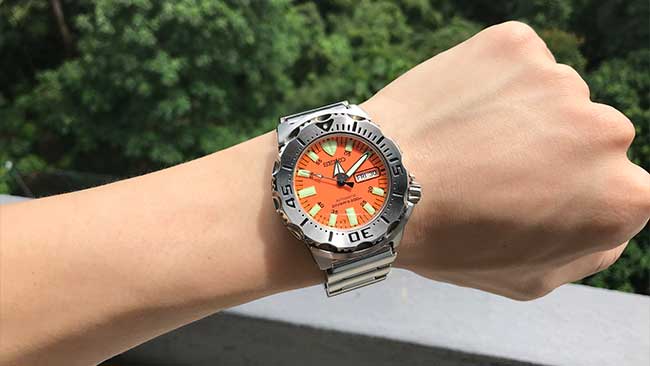 The Seiko Orange Monster watches are an amalgamation of robust designs, sturdy appearances, and top-notch durability. Distinguished by their 200m water resistance capacity, the Monster watches feature thick bezels and wide case sizes; both of which are complementary to their famed toughness.

In this post, we are taking a look at the 5 best Seiko Orange Monsters that you can buy in 2021. If you are confused about which model to pick (and you are not to blame, seeing the variety that is available), go ahead and give this list a look.

Coming up at number 5, we have the Seiko Orange Monster 2nd gen. edition. The Orange Monster was released in different versions or ‘generations’ over the years, with each successive one bringing something new to the scene. The 2nd gen. series was released by the company in the year 2012 and had a couple of new features in comparison to the 1st generation (which was released 12 years prior in 2000).

The Orange Monster (2nd gen.) features a 42mm case size. This is a suitable pre-set since it meets the standard and average wrist size for men. Due to the large bezel and overall thick design, the 42mm case size can look quite suitable, even on smaller wrists.

The case is made using stainless steel while the crystal is of Hardlex. Unlike the 1st generation watches, the 2nd gen. versions have the option of manual winding/hacking thanks to the 4R36 caliber. The watch has 40 hours of power reserve and works at a frequency of 21,600 beats per hour. The movement of the watch features a 24 jewel system.

The 3rd generation editions come with an upgraded caliber viz. 6R15. The power reserve that was 41 hours and 40 hours in the 1st and 2nd generations respectively is increased to 50 for a longer experience on a single wind.

Similar to the 2nd generation models, the Orange Sunburst Monster can be manually wound and hacked by the user. The movement features 23 jewels and a frequency of 21,600 beats per hour.

The one unique feature of this watch is the gradient hue of the dial. The area closer to the outer rim is darker as compared to the center, where the color gets lighter. If you are choosing between any other 3rd gen. watch and the Sunburst Monster, the color of the dial can be your deciding factor.

The specs and features of this one are pretty much the same as the Sunburst Monster. Since both of these watches were released in a single generation, the features such as the caliber, movement, and frequency are identical.

The 1st gen. watches had a 7S26 automatic caliber, which came without the option of manual winding/hacking. The movement consisted of 21 jewels and had the usual frequency of 21,600 beats per hour.

The actual appearance of the dial of the 1st gen. watches was different from the 2nd and 3rd gen. editions: the shade of orange was lighter and the indices had numerals (for seconds) written alongside.

This watch is where it all started. The Classic 1st Generation Seiko Orange Monster comes in at number 1 on our list. The vivid orange dial along with the small black numerals make the Classic an aesthetic and stylish watch. Like the Night Monster discussed above, the Classic Orange Monster also had a 7S26 automatic caliber. It came without the option of being manually wound/hacked.

The size of the Classic was the same as every other Monster watch: 42mm. The old-fashioned yet elegant design of the 1st generation Seiko Orange Monster is one of the many reasons why it should be your go-to dive watch.

And that is all there is to it. In this post, we looked at the five best Seiko Orange Monsters you can buy in 2021. Read the specs, take your pick and get buying.