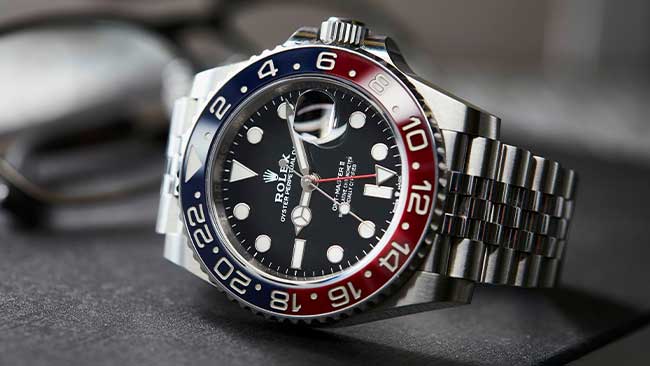 The Rolex Pepsi is one of the most popular Rolex watches out there because of its elegancy, class, and iconic value.

Because of this, many celebrities have been wearing them, which also proves that this brand is one to reckon with.

Not only does this give utmost class and enthusiasm to the wear, but this has also proven to be a head-turner because of its iconic colorway that is very similar to the much-loved soda, Pepsi.

So, who are the celebrities that wear these Rolex Pepsi GMT, and why do they wear them?

This article answers just that. We will also provide you with a more detailed look into the personal tastes and preferences of these celebrities so you can better gauge how deep they are in the watch industry, specifically with these Pepsi GMTs.

Orlando Bloom is one of the most famous celebrities that wear a Rolex Pepsi. Specifically speaking he was seen on several occasions wearing a Rolex Master Pepsi 1675. This is a top-tier Pepsi watch that features a five-piece Jubilee bracelet.

It also sports pointed crown guards that add to its elegance and head-turning value. Note, though, that this was only used in the early models of Rolex’s 1675 variant. You’ll have a hard time finding these now because already have more traditional crown guards.

Daniel Craig, the James Bond of the new generation is more than just Agent 007. Well, wearing a Rolex Pepsi is just fitting for his character because these timepieces are made just for that purpose. It’s all about courage, masculinity, and the ability to achieve the seemingly impassable.

It might just be a watch, but it resembles how tough the wearer can go through. Daniel Craig shows that he’s a good match with the watch as he wears the Rolex Pepsi 16710.

This is the second model of the watch manufacturer’s GMT-Master II lineup. This was manufactured from 1989 to 2007 and is the last of the models of GMT Master II to feature pre-Cerachrom alloy bezel inserts.

Then there is John Meyer, the much-loved singing sensation who is well-known for his soothing and calming voice.

Unknown to many, he’s also a Rolex Pepsi fanboy as he owns a 116719 variant. This comes in 18k white gold, though, making this way more expensive than its stainless steel counterparts.

And aside from already being made with precious metal, it also comes with many other standout features.

First off is its Cerachrom bezel made from premium ceramic. It also comes with a Triplock triple waterproofness system as well as large Maxi dials. His watch even runs on Caliber 3186, which is a Parachrom hairspring that provides better protection against magnets and extreme temperature variations.

Ellen Degeneres who is crowned as the talk show queen along with Oprah Winfrey also owns one of these Rolex Pepsi watches. She has a 116719 variant that has a ceramic bezel made from Cerachrom.

This is further beefed up with a Triplock triple waterproofing system that provides better protection against the elements. This is a great choice for her active lifestyle knowing that she’s a person who is always on the go.

This is further beefed up with a Triplock triple waterproofing system that provides better protection against the elements. This is a great choice for her active lifestyle knowing that she’s a person who is always on the go.Sylvester Stallone

Sylvester Stallone owns a Rolex Pepsi watch, which is a perfect fit for his masculine image and heartthrob looks. But it’s more than just all aesthetics, as this one compliments his lifestyle that’s full of posh and class. His timepiece comes with a Cerachrom bezel.

This is also made even better with the proprietary feature common in Rolex during those times, the Oystersteel. What’s more, is that Sylvester Stallone is among the first celebrities who are spotted wearing the contemporary variant of the Rolex GMT Master II.

Trevor Noah, the successfully acclaimed South African comedian host was also seen sporting the Rolex Pepsi watch with all its glitz and glamor.

Specifically speaking, his Pepsi comes with a five-piece Jubilee bracelet, Rolex’s proprietary Oystersteel, and the original blue and red colorway of the contemporary Rolex Pepsi.

This just shows that the watch brand has come a long way and it is continuing to make its rounds across the entertainment industry. What better way to advertise the timepiece than by making its way into the hands of the celebrities directly?

Tom Selleck is maybe Hollywood’s most faithful fan of the Rolex watch. He has been wearing his Rolex GMT-Master Pepsi on screen since he starred in Magnum, P.I. in the 1980s and continues to do so on the television adaptations of the Jesse Stone detective novels.

There is also Tom Selleck, who is considered as one of the biggest fans of the Rolex GMT Master Pepsi.

He has been seen numerous times wearing one. A single occasion was when he starred in the hit movie, Magnum PI. However, he has been seen sporting one on his many TV shows.

Brad Pitt, globally-renowned American actor, superstar, and heartthrob, is among the many Rolex fans out there as he has his own Rolex Pepsi.

No doubt he’s one stylish dude, and everyone also knows that he’s an endorser of Breitling and Omega. But despite that, he’s also seen sporting a Rolex Master for the film, Ocean’s 13. This only proves one thing, and that the Pepsi variants are fit for celebrity royalties.

David Beckham is also a Rolex fan, but he’s on a slightly different field as instead of a Pepsi watch, he’s got a Rolex Root Beer GMT.

Nonetheless, he’s been seen wearing a variety of Rolex watches in many of his interviews and press conferences. David sure knows how to choose a timepiece with style and that will show his athletic prowess both on and off-field.

As shown by its fame and successful popularity across the globe, the Rolex Pepsi GMT has proven to be an iconic timepiece.

It has more than six decades of history behind it since it was first manufactured. And despite that, it still continues to grow even if smartwatches are already creeping in the corner.

Nonetheless, there is no doubt that more high-level celebrities are going to choose the Rolex brand, or more specifically, the Rolex Pepsi variant because of its unique class, elegance, and royalty vibe.