Cuervo y Sobrinos and Everything About Them 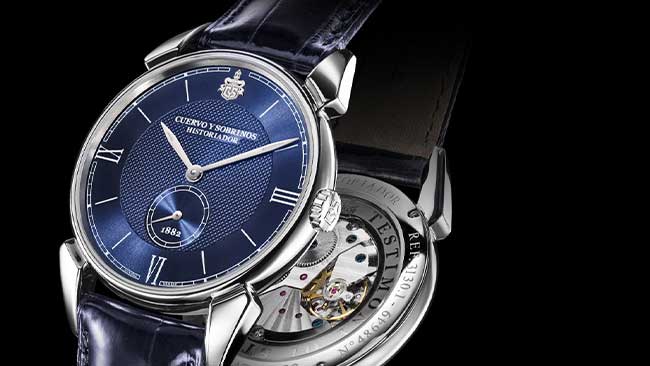 So, what do you think makes Cuervo y Sobrinos watches unique?

Cuervo y Sobrinos watches possesses a unique position in the Swiss watch industry with its identity and tradition that differentiates it from other Swiss watch brands. It obviously is the legacy and history, along with strict quality controls, that have boasted the Cuervo y Sebrinos brand name.

Let us now see more into this brand’s history and everything that has made it so special.

So, you might now be thinking why such a historic store has been fleed by its founders? Here is the answer.

Cuervo y Sobrinos was originally established in the year 1882 by an immigrant from North Spain, Ramon Fernandez Cuervo. He started with a jewelry shop, Calle de la Amistad, in Havana in the year 1862. It was after that, in 1882, he began Cuervo y Sobrinos with his nephews as partners. The name ‘Curveo y Sobrinos,’ when translated, means ‘Curveo and  nephews.’

The 1880s witnessed the Cuervo Y Sobrinos watch and jewelry brand’s peak success as travelers were affluent in Havana. Travelers across the world visited Havana to enjoy its slow-paced life. And as a result, the demand for the Cuervo family’s watches was voracious than the demand for white rum and Cuban cigars.

The founder of the Cuervo Y Sobrinos, Mr. Ramon Fernandez Cuervo, died in 1907. One of his nephews, Mr. Armano Fernandez y Rio, took the responsibility of running the brand and continued working for the company’s growth. The brand has obviously grown as a family business with business skills and trades passing down to generations. Moreover, Cuervo Y Sobrinos had many inspirational figures as its patrons. The famous personalities of the 19th century, including Clark Gable, Ernst Hemingway, Winston Churchill, and Albert Einstein, considered Cuervo Y Sobrinos watches as an intelligent choice.

The brand began growing and expanding its network until the Cuban revolution took over Havana in the year 1953. Twos new Cuervo Y Sobrinos store were opened in the years 1917 and 1918 in Calle San Rafael y Aguila. In 1920, the company spread its operations into Europe with an office in Paris for trading jewelry and a site at Pforzeihm in Germany exclusively for the purchase of stones.

A watch factory was also established for Cuervo Y Sobrinos in La Chaux -de-Fonds, a city famous for watchmaking, in Switzerland. With extensive expansion and growth, Cuervo Y Sobrinos was listed as a public listed company in 1932, which helped find more talented managers from outside the Cuervo family. And by the 1940s, Cuervo Y Sobrinos had become one of the most popular brand names in the American continent.

Havana was a luxurious city and roaring with travelers worldwide, and as a result, businesses in the city splurged in the 1950s. The Cuervo Y Sobrinos boutique has eventually become a major attraction in Havana. Many famous personalities, including Neruda, Hemingway, Churchill, and Gable, have marked their visit to the Cuervo Y Sobrinos store during their time in Havana.

Things went worse abruptly for Cuervo Y Sobrinos when Cuban Revolution outbroke in Havana in 1953. The brand was nationalized in 1965, and a steep decline was witnessed in the company’s growth. After that, only military watches were being produced for the Cuban army. The Cuervo family had to leave their shops locked and flee the place with whatever they could take in their hands. As a result, the Cuervo Y Sobrinos boutique stayed locked with steel vaults for the next 40 years. Eventually, the brand came into a dormant state, and no watches were made in the period between 1965 to 1996.

In 2009, Cuervo Y Sobrinos was the first luxury watch brand to launch its own store in Cuba. The brand celebrated its 135th anniversary in 2017, launching a special Historiador limited edition watch. A team of investors acquired Cuervo Y Sobrinos in 2018, and Massimo Rossi became the company CEO.

And in 2019, the Cuervo Y Sobrinos brand marked its 500th anniversary by releasing the Historiador 1519 limited edition series, of which’s manufacture was restricted to only 500 pieces.

Cuervo Y Sobrinos watches are made to last. The brand ensures the longevity of its watches by providing a full two-years warranty from the date of purchase. Therefore, you can resolve all defects and errors in Cuervo Y Sobrinos watches by sending them back to the company. The company makes sure their watches will never be a headache to you by providing watches that enable you to enjoy them for several years.