When Gevril Brand was founded? 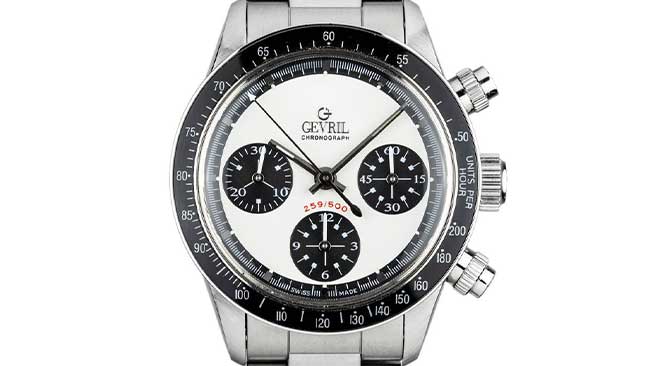 Gevril Watches was founded in 1758 – which was around the time when most of today’s oldest watch brands (like Vacheron Constantin and Blancpain) came into existence. Although Gevril Watches does not have the same level of public acclaim as other Swiss companies (such as Rolex, Tissot, and Patek Phillippe), it does have a notable history and origin. Now, Gevril Watches owns a sub-brand called Gv2. GV2 watches share the classical and modern look of their parent company and are sold under the same umbrella.

Gevril Watches was founded by a Swiss watchmaker named Jacques Gevril. Gevril was born in La-Chaux-de-Fonds in the year 1721. He made his first chronometer in 1743, which marked the beginning of his career. 15 years later, he accompanied Pierre Jacquet-Droz (who was a well-known watchmaker at that time) on a trip to Madrid. This trip proved to be a turning point in his career and it was after this momentous incident that the company was established.

Jacquet-Droz decided to make a trip to the king of Spain in 1758 so that he could exhibit his merchandise in the royal court. Impressed by the timepieces, King Ferdinand VI bought them for a price of 2,000 pistoles (gold coins).

Afterward, Jacquet-Droz returned to Switzerland but Gevril stayed in Madrid. He was appointed as the ‘Royal Clockmaker’ by the king and thereafter, he spent considerable time making clocks for the royalty and sharpening his skill.

In later generations, names like Daniel and Moyse Gevril continued the tradition of exquisite watchmaking. However, after the death of the founder, the reputation of the company suffered and it gradually lost the name and acclaim which it had initially gained.

A revival attempt on the brand was tried in the late 20th century, which proved to be unfruitful. In 2001, it was acquired by Samuel Friedmann and things started to look up. Friedmann penetrated the US market with some innovative releases that were geared towards the American audience. In the wake of this effort, Gevril Watches is once again climbing the ladder to reclaim the position and reputation it had first held in the time of its original founder.

Samuel Friedmann acquired the company in 2001 and made his initial efforts to penetrate the US market in the same year. However, due to the incident of 9/11, the progress was deterred and things didn’t go exactly as planned for the Swiss company.

However, persevering through the unfavorable conditions, Friedmann came up with new and modern releases such as the Lafayette and New York collection. Friedmann was particular about retaining the historical value in the new watches and thus, the products in the latter collection sported a classical and old-fashioned albeit stylish look.

An effort made by the company to make their products more appealing to the US audience was the nomenclature adopted for some of the newer timepieces. The watches featured in the New York collection were named after popular places in Manhattan. One of the iconic releases in this range is the Avenue of the Americas series.

The rectangular dial combined with the retro ‘20s style numerals brings about the materialization of Friedmann’s ambition of combining old-fashioned designs with modern functionality. Some variants in this series include the Avenue of Americas Glamour, Mini, and Mini MOP.

The exclusivity attributed to these timepieces contributes largely to their worth and value. For example, a mere 500 pieces of the Avenue of Americas Glamour (stainless steel version) were released by the company. Due to this limited availability, pre-owned watches can become more valuable over time.

Keeping in Touch with the Past

If you are looking for something modern at Gevril, you can always go for a GV2 watch.

These timepieces are suitable for people who are fond of newer watch designs and are not very keen on sticking to the old-fashioned legacy of the company. Although there are certain products offered by GV2 which feature a classical and retro theme, series such as the Scuderia and Contrasecondi come with tech and futuristic appearance.

If, on the other hand, you are looking to keep in touch with the antique and historical Gevril theme, you don’t have to look farther than the 1758 pocket watch collection

The 1758 pocket watch collection echoes and reflects the 18th-century style. Although it will not be very easy getting your hands on an original Gevril pocket-watch, the 1758 collection will serve to be a good substitute.

The price tag on this timepiece is $1,795 on the official Gevril online store.

Are GV2 timepieces worth buying?

The interesting thing about Gevril is that while it was founded more than 250 years ago, it does not have a very rich and remarkable timeline. Companies that were founded much later have greater prestige in the market. This can primarily be attributed to the diminishing reputation that ensued after the death of the founder. Nevertheless, after it was acquired by Friedmann 20 years ago, it has gained back some of its lost esteem. It still has a long way to go in order to compete with other popular Swiss brands like Rolex, Tissot, and TAG Heuer.

Due to these factors, it is generally perceived that the watches offered by the company are a little bit too costly. If you can afford it, then you should go for it by all means. But some potential buyers and critics entertain the opinion that one should only purchase a Gevril or GV2 watch if it is sold at a discounted price. There is no doubt about the quality and standard of these timepieces but the price tags can be seen as extravagant and unnecessary.

Found in 1758, Gevril Watches is one of the oldest brands in the industry. The 263-year old company is now headed by Samuel Friedmann. After coming under new management, Gevril Watches has been imbued with a new vitality, and products such as the Avenue of Americas are at the forefront in paving the path for the brand to reach its former renowned status.