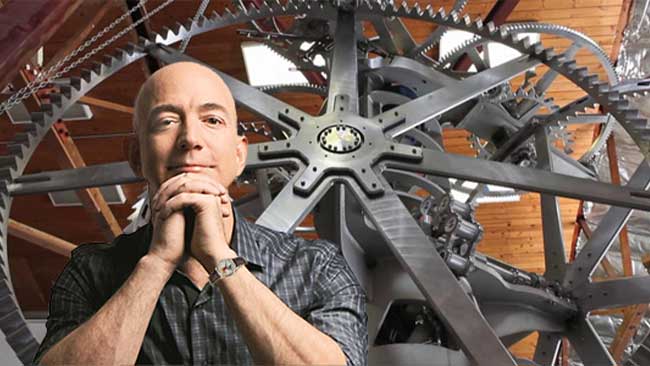 It is a well-known fact that Amazon CEO Jeff Bezos is a person of many interests. His innovative thinking created online platforms like Amazon and AWS. With his recent trip to space, Jeff Bezos was able to accomplish one of his goals. But, don’t think he will stop there. This space trip is just the beginning. He wore an Omega Speedmaster watch for this space mission. This watch is much expensive than the Omega Seamaster Diver 300M.

Omega Speedmaster Moonwatch to the Space?

Jeff Bezos successfully traveled to space on 21 July 2021. With that accomplishment, he became the second billionaire to ride his spacecraft. Virgin Galactic’s Richard Branson was the first billionaire to accomplish this goal.

Apart from the Blue Origins space mission, Jeff Bezos is working on another epic mission. He is building a 10000-year clock. Amazon CEO already invested $42 million in this project.

Why is Jeff Bezos Building this 150-meter tall clock?

This project is called “Clock of The Long Now,” They started this project in 2018. The main goal of this clock is to run for 10,000 years. If they can pull this off, this will be the most remarkable engineering project in our civilization.

Initially, the idea for this project came to Danny Hillis’s mind in 1986. After 22 years, Jeff Bezos started the task inside a mountain in West Texas. This mountain is located 2000 feet above the valley floor. The clock is 500 feet tall and powered by all mechanical systems with a day/night thermal system. Jeff Bezos’s team spend the last couple of years drilling through the mountain and machining parts for this fantastic clock. With recent tweets, Jeff Bezos hinted that they had started the installation of the machinery inside the mountain.

But, completing this project will take a while. Jeff Bezos owns this construction land, and most people won’t see it in person.

Building this type of gigantic clock is never easy. Many critics have described it as an impossible task to complete. But, it is not impossible either. That is why Long New Foundation designed a prototype for this 10000-year clock. It was presented at the London Science Museum.

This prototype is almost 09 feet tall and was built to check the core fundamentals of this project. It looks like an early European tower clock; the main display indicates the current year, the sun’s position, the position of the moon, and the moon phase. Two brackets pointed to 4:00 and 8:00, showing the moon rise/set and sunrise/set. And the inner dome showcases the stars that are visible above the horizon.

This prototype includes the astrolabes instrument; it is a medieval astronomical instrument designed by Dr. Ludwig Oechslin.

What kind of watch does Jeff Bezos will wear to the opening of the 10000-year clock?

As we pointed out earlier, for his Blue Origins space mission, Jeff Bezos wore an Omega Speedmaster Moonwatch. It was a classic watch from Omega’s iconic watch collection.

The project “Clock of the Long Now” will be completed sooner than expected. They have already started the installation process for machinery. Even though the clock is 500 feet tall, modern technologies and the funding of Jeff Bezos will accelerate the project to a great extent. So, everything goes according to the plan; we could see a new wonder for earth and humankind.

Usually, Jeff Bezos likes to show off. So, when the time comes, he will wear something unique to unveil the 10000-year clock. Most likely, it will be an Omega watch. Most famous celeb and billionaires like to wear this timepiece for special occasions, like James Bond movies, moon landings, royal weddings, and many more.

Special Occasions on which Omega Watches were Used

Throughout its rich history, Omega watches have been warned by many famous peoples for special occasions. Here are some highlights for you.

Jeff Bezos 10,000-year clock might be a historical project if they can complete it. If everything goes well, we could see another memorable moment for humankind and Omega Seamaster Diver 300Mwatch.