Junkers Bauhaus Watch and Everything About it 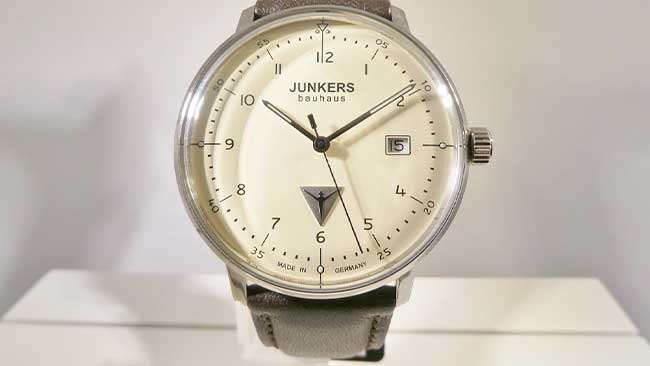 Junkers is one of the oldest German watch brands that started as an independent company. Launched by Hugo Junkers, who himself was an engineer and an admirer of fine art skills, they are a niche brand when it comes to watchmaking. The Junkers watches and its various series manufactured by them are world-famous.

Hugo Junkers initially ventured into manufacturing and supplying military aircrafts to the German military. Later on, inspired by the Bauhaus movement, he started manufacturing Junkers watches. The company has been recently bought by Pointtec, a leading watch manufacturing company in Germany, and renamed Iron Annie. Iron Annie was a famous aircraft manufactured by Junkers.

Nothing apart from the name has changed. It is still a family business, watches are manufactured the same way and Junkers watches are still made in Germany.

In the year 2013, Charlotte Junkers, great-granddaughter of Hugo Junkers launched the latest series of Junkers watches under the name Iron Annie.

Going back into history a bit, Hugo Junkers was not just an engineer but a visionary as well. He related with the liberal ideas propounded by the Bauhaus movement and greatly supported them.

The movement, started by Walter Gropius in 1919, stood for a perfect amalgamation of art, design, and architecture to produce something unique.

Junkers’s life took a fascinating turn when he associated himself with the Bauhaus movement. In fact, he played a catalyst in relocating the Bauhaus art school to Dessau. In Dessau Junkers’ factories were located. By associating and working with the Bauhaus artists, Junkers’ engineers were able to help them and in turn, Junkers included Bauhaus designs into the cockpit of his aircraft.

There are several Bahuhaus Junkers watches and each is different from the other and a masterpiece in itself.

Bauhaus 6070-5 Quartz Watch- this stylish and graceful Bauhaus watch is quite German in its design and function. Its steel case is 40 mm x 11 mm, a leather strap and black face markings with a beige dial. Its features make it a masterpiece in itself. Its movement is Swiss-made Ronda 515 quartz.

Bauhaus 6086- 5 Quartz Watch- this is an elegant yet simple Junkers watch. It offers extra time taking mechanics. It is a sophisticated and timeless design with fine detailing. It has a 40 mm x 10 mm steel casing and a Swiss-made Ronda 5030.D Quartz. Its features make it a fine timepiece.

Bauhaus 6060M-5 Automatic Watch- this Junkers watch has a steel-type mesh strap, a steel case, and a solid crystal lens. Its mechanical movement is self-winding and it utilizes the movement of the arm to supply energy. It has a 40 mm x 12 mm steel casing, a strong sapphire crystal lens, and the self-winding movement is Japanese made.

Bauhaus 6050-2 Automatic Mechanical Watch.- this Junkers watch has steel hands on a black face and a hard crystal lens. It is an elegant yet discreet model for those who want to maintain a low profile. The working of the watch is powered by the movement of the wrist. The self-winding movement is powered by Swiss made ETA 2824-2.

Bauhaus Lady 6073-1- part of the women’s collection, this Junkers watch has a leather strap, silver and gold hands, and a stainless steel frame. Its stainless steel frame is 35 mm. The movement is powered by Swiss made ETA F06.111. It is sure to make a statement and is fit for any occasion.

Bauhaus 6030-5- Bauhaus watches are simple and minimalist in design. But this doesn’t mean they are bland. In this particular model, there is a sub-dial for the minute’s hand. Its silver and gold color scheme makes this Junkers watch model even more attractive. It has a 9 mm thickness and 40 mm diameter. The neat detailing of the features in this watch are hard to miss. The mechanical hand-winding movement makes this Junkers watch model authentic.

Bauhaus 6050-5 automatic- this is an everyday as well as occasional watch Junkers watch. It has a 40 mm beige color dial, a date window, a silver case with Hesalite glass. It is powered by ETA 2824-2.

Where are Bauhaus Junkers watches made?

Bauhaus Junkers watches are primalriy Made in Germany. However, some of the parts are manufactured in Switzerland and Japan. The final assembling takes place in Germany.

Where can I buy Bauhaus Junkers watches?

Junkers started as an independent brand and continues to be one today. Bauhaus Junkers Watches are guaranteed to be of distinctive and brilliant value due to German engineering design and craftsmanship. Plus, they provide a 2-year warranty. They manufacture simple and minimalist designs of watches.

The Junkers Bauhaus watches are both high-end and affordably priced.

How much does a Bauhaus Junkers watch cost?

A Bauhaus Junkers watch can cost anywhere between $300 AUD and $1200 AUD. It is a misconception that Junkers watches are high priced, especially the Bauhaus series. However, along with customized timepieces, affordable ones are available as well.

What are Bauhaus Junkers watches made of?

Junkers manufacture both mechanical and quartz watches.  It is powered by imported calibers from several suppliers like ETA and Ronda. The various models have a 30 mm to 40 mm case, mostly stainless steel made.