Ressence watches and everything about them 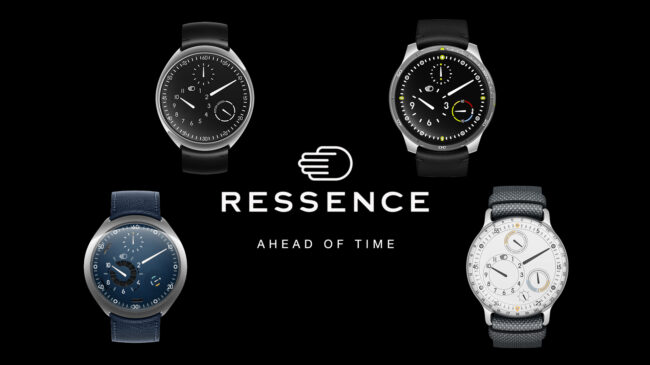 Ressence is a watch brand from Switzerland (Fleurier, Locle and Chaux de Fond) that was released in 2010. The brand competes with other similar brands within the luxurious jewelry market. The name Ressence came from the two words “Renaissance” and “Essence”. Both reflect the mere concept of the brand.

In 2010, Benoît Mintiens established the brand in Belgium (Antwerp). What was different about this brand was that all the components of the watch in the dial were placed under the sapphire glass. These components include numbers, discs, and circles that show the time and the hands.

The design of the watch is so sophisticated. All of the above components float on a mechanical display which has a relatively dense liquid and a pressure valve to regulate the temperature of this liquid. The discs and rings rotate around themselves and the dial rotates around itself as well.

In fact, this design, although considered unique, wasn’t the first time to be introduced. The design of discs that show time instead of hands was first introduced in the 70s. This design wasn’t so popular though but it was available at some famous brands. For example, Seiko in 2007 introduced “Discus Burger” and Swatch also introduced a similar model in 1994.

Although Ressence watches were criticized by some people for being difficult to comprehend, it gained popularity among people. They perceived it as a well-made luxurious watch with much nuanced details.

When the watch was first presented in 2010 at BaselWorld, the manufacturer introduced three prototypes. The first was named “Zero Series” as an indication for the very first line of the watch. The brand manufacturer released only 50 watches from this series as a first run.

In the following year, the brand was recognized by the Geneva Time Exhibition and it was given a “Special mention”. This added to the popularity of the brand as well.

Later, the “Series One” was introduced in 2012. Although the changes were minor, the series was better while keeping the unique feature of Ressence watches as the sapphire and the shock absorption mechanism.

Back to the BaselWorld but this time in 2013, the manufacturer introduced “Series 3”. This series came without a crown and this was a relatively different design than those presented at that time.

Ressence watches continued to gain recognition and awards as the Horological Revelation Award and others until today thanks to the seamless design and the sophisticated pieces.

Ressence watches have around 6 types. The design of all the types has the same taste. However, there are differences that can be easily spotted by anyone. If you are a watch enthusiast, you will easily recognize how innovative and different these watches are. So, let’s take a look at the Ressence watches and all the types.

This type is considered the upgrade of the “Zero Series” which was the first release of Ressence watches. The display comes in several colors and there are also versions with square displays instead of the traditional circle ones.

The model is found from years ago, however, this model was modernized recently to suit the current trends. The current version is the Ressence Type 1 Slim.

The case thickness became 13 mm instead of 42 mm and the diameter is around 42 mm. This new revolutionized model from the Series Type 1 became consistent with the other models from Ressence watches.

Moreover, this model has four editions; a black one, a white one, a night-blue one, and a silver one.

The next version Ressence watches have is The Ressence Type 2 that was launched recently with a whole modern new concept. The “e-crown” was introduced for the first time in this series. This technology incorporates a mechanical watch that automatically resets the watch to the correct timing if the battery ran down.

Further. The watch has the selector sub disc displayed in the dial. This means you can see all the modes and set your watch to the preferred mode from the dial. These modes include two time zones, thee-crown mode, and application mode. This latter allows you to adjust the watch manually and track its power.

As for the construction of the watches from this series, it is made of titanium. The dial has some openings to allow sunlight to pass in to charge the e-crown and allow the watch to work while the batteries are dead.

If this is the first time to see Ressence watches, you might confuse the Ressence Type 3 with 1. Both are similar in many features. However, Type 3 has a liquid case which is not available in Type 1. Also, Type 3 doesn’t have a crown and its dial indicators have the hours, minutes, seconds, and date.

This series was criticized for its difficulty in reading. However, we believe that once you get used to it, you will be able to easily read the dial.

Similar to the previous type, Type 3 is also made of titanium. The case has a spherical shape as well.

This is not considered separate but actually one of the editions of The Ressence Type 3. The watches of Type 3W have rotating discs that rotate independently from each other. This means no overlapping between discs.

The model has a version that comes in a black dial and another one coming in a silver dial. Generally, this model is not heavy and not bulky on the wrist either.

The visual perception of this watch works by dividing the watch’s interior into two parts with oil in the lower disk. The construction of the watch seems complex but the appearance is perfect.

Finally, Ressence Type 5 is the latest innovation and the upgrade of the oil-filled watches introduced in the previous model.

The watch has some innovative features as being easy to read underwater, so, it is a good dive watch. Also, the viewing angles are all perfect as you can view your watch from different angles and the vision will be good from all.

The watch is available in black dial color and a night blue dial with a dark blue strap.

What if fine watchmaking was a 21st century invention? Ressence Watches