Rolex Nickname Guide You Should Know 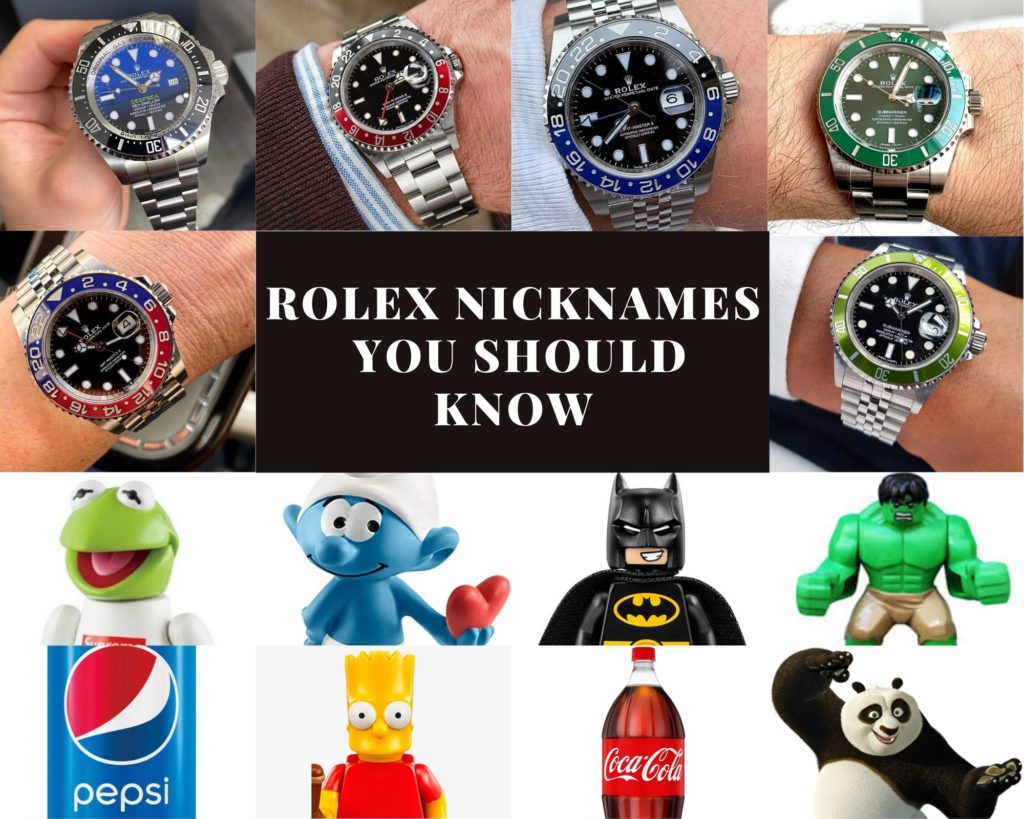 As humans, we like and even love some people to the extent of giving them nicknames. We also assign them nicknames or pet names to convey the need for personal privacy and respect for the friendship between these men and us. Luxury watch enthusiasts always chat about Coke or a panda on their wrist and also Batman and Hulk, but not in a superheroic way.

When you refer to different models in the watch collecting culture, it is reasonable to hear several nicknames. After all, remembering a catchy nickname is much easier than remembering the long strings of digits that form the official watch reference number. The use of Nicknames for luxury watches became a common practice, although some watch enthusiasts disapproved of the use of nicknames. In this article, we will cover different models of Rolex watch nicknames and why they are called by it.

The Rolex’s Day-Date line of watches is often called “President”. This nickname fits the quality of the luxury watch, it is a prestigious model among the Rolex family. The Rolex’s Day-Date is instantly recognizable thank to its symbolic president bracelet, whose evocative name, along with the eminent people that wear it, made the day-date nicknamed as the “president’s watch”. The Day-date is a watch used by numerous politicians, managers and visionaries around the world.

The Rolex GMT-Master was first GMT-Master II in 1983, it was giving the nickname ‘Coke’ or ‘Fat Lady.’  This was the first GMT and the latest caliber 3085 with Sapphire quartz. At the height of 6.3 mm, this greatly led to the nickname “Fat Lady,” the campaign was greater than ever.

The model was not clunky but slightly smoother, due to the broader movement and the curved glass. However, the “Fat Lady” was built for just six years and was replaced by the newer model by Rolex in 1989. This is still the only model with deep dark redness on the bezel, with a bright red hue on the accompanying GMT.

Looking closely on the logo embedded on a coke bottle, it is red and white, mostly red, and the Rolex GMT-Masters are red and black. However, what is black and red? Coke, isn’t it? The nickname was given to the watch because of the colour which is similar to coke.

The first red and white Rolex GMT-Master, designed to match the colours of Pan American Airline, was introduced in 1954. Apparently, Pepsi’s colours are both blue and red. This Rolex GMT-Master has a red and blue bezel embedded in it, which makes Rolex owners happy. So, it was nicknamed “Pepsi.“

After the introduction of Coke, the first Pepsi GMT Master II revived in 1988. Every few years Rolex has launched Pepsi’s various versions. In 2018, Baselworld received overwhelming answers from its enthusiasts from the newly designed Pepsi 126710BLRO.

The Rolex GMT Master II (Ref. 126711CHNR) is seen as lemonade. The bezel of the Rolex’s own alloy Rolesor Everose is black and brown, and several features have won the luxury watch the nickname “Root Beer.” It is a cocktail that is non-alcoholic that is commonly served in the United States and Canada.

The GMT-Master I ref. 116710BLNR, also known as “Batman,“ is one of the most common GMT-Master II variants of Rolex today. It got its nickname because of its blue and black ceramic bezel. The ceramic bezels were launched by Rolex in a single colour, as the company found that dual bezels couldn’t be made. Nevertheless, they managed to solve the difficulties a couple of years later and create a bicolor bezel. The Rolex Batman stainless steel is almost as popular as a superhero.

The Green Rolex Submariner 116610LV which as a nickname called the “Hulk” due to its huge and thick case design and its all green colour profile, this feature is common to the furious superhero hulk.

The Rolex Submariner is referred to as “Kermit” (Ref.116610LV). The bezel of the watch is green, as is seen in the LV (French for the Lunette verte). The dial is rich in black, which resembles the Muppets’ happy frog.

The counterpart to the Kermit is the Hulk – Rolex Submariner (Ref 116610LV), which also has a nickname, in reference to the green bezel.

The name “Hulk” came from the Rolex culture. The dial is green with this model, making the whole clock appear green and definitely a gazebo. Those are characteristics that nobody portrays better than the furious Marvel comic giant, which is unmistakable.

The Rolex “Smurf” is often used to refer to the Rolex Submariner Ref. 116619LB, an uncommon nickname that persists in some Rolex collecting circles. It has 18 kg white golden frame, blue button, and blue bezel. This feature brings into remembrance of the Smurfs cartoon characters. It, therefore, has this nickname because of this.

The Rolex Submariner Ref. 5513 got its nickname “Bart Simpson” because of its similarities between a cartoon character’s head Bart Simpson. It has a coronet logo, a flat and shortened crown in the dial. The luxury watch with the Bart Simpson coronet was produced before 1966 and had its last production in 1966.

The nickname “Eye of the Tiger” of the GMT Master Ref. 116713 based upon the album cover and song of the band “Survivor.” The bezel and dial set in brown are simply a very appropriate definition from golden applications such as the crown, the 24-hour bezel, or Jubilee bracelet. The tiger’s eye is visible in the dark: the hands and indices glisten in green light, and the reflections of the golden elements make the illusion entirely accurate.

The Rolex Deep Sea-Dweller with the D-Bluedial is a special edition of its Sea-Dweller set, it was designed as a tribute to celebrate the filmmaker James Cameron’s successful 2012. It was nicknamed after the famous James Cameron.

“Stelline” is the Italian word for “little star” and a nickname for the Rolex ref. 6062 antique watches with star-style markers. These Star Indexes are not all Ref. 6062, some of which have triangle indexes, so the name of Stelline is reserved for Ref. 6062 Rolexes which includes these star indexes. In the same period as the Padellone, the Ref. Rolex 6062 was made.

Initially, Rolex explorer II was only available with a black dial option. But people in the Rolex community began referring to white dial versions as “Polar” explorers with the introduction of the white dial version.

The Explorer watch lines are designed primarily for explorers and the adventurous, the nickname “Polar” considering the purpose of the design and the colour of the luxury watch fits perfectly for the white-dial version. The nickname is, however, an easy and quick way to distinguish between the two watches.

The nickname “Steve McQueen” for the Vintage Rolex Explorer II is probably a misnomer since Steve McQueen who was a fan of Rolex Submariners never wore it. The nickname is traced back to the campaign in the 1970s in which the watch manufacturer used McQueen’s image to increase their sales of watches designed for the speleologist.

The reference 1680 does not have a precise date of manufacturing, it was the first submariner series ever to be created. The Submariner was primarily designed as a watch with time-only dive. The Submariner name was displayed on the dial surface in red text for the first half of the 1680 development period.

However, Rolex switched to white text during its second half of every production, this practice was maintained ever since then. To distinguish between the various types of 1680 dial variances, early production models using red writing were known by many members of the collecting community as “Red line”.

In 1977, Rolex substituted the Double Red Sea-Dweller for another Sea-Dweller and still retained the same reference number – 1665. This new Rolex Sea-Dweller had several significant differences to the DRSD.

Firstly, the label “SUBMARINER 2000,” which was considered a separate line rather than modified submariner by the Sea-Dweller, was replaced on the dial. Secondly, the blue font has now been replaced by white text, which makes it known as the “Great White” Rolex. For only 5 years the Rolex Sea-Dweller ref. 1665 Great White was produced.

Rolex ‘Solo’ is an antique chronograph of Daytona with a dial and just the word ‘Rolex.’ This is a rare case because Rolex watches often contain plenty of text and those Daytonas don’t even have the words ‘Daytona,’ or ‘Oyster’ or ‘Cosmograph’ – it’s just Rolex. It was, however, nicknamed as “solo.“

We hope you enjoy this list of Rolex nicknames based on our best research.

Did we miss something? Let us know in the comments.

Quick Search
Watches less than $5,000 Watches $5,000 - $10,000 Watches $10,000 - $15,000 Watches $15,000 - $20,000 Watches above $20,000 Luxury Watch Reference Numbers
Pre-owned watches Dive watches Gold watches Blue watches Automatic Watches Manual-winding watches Most popular luxury watches models Watches with market price higher than MSRP
Recommended For You See All
Patek Philippe vs Rolex Watches: A Comparison of Two of the World’s Finest Timepieces
Top 10 Rolex Sports Watches You Can Buy in 2021
A Definitive Guide to Buying Luxury Watches Online
The Wolf of Wall Street Watches: Tag Heuer, Rolex, IWC
7 Watches That Look Like Rolex: Alternatives that won’t break your bank
Rolex: What You should Know About the King of Watches
Getting more articles...
stop
stop
stop
stop
See All
WatchSignals uses cookies to ensure you get the best experience on our website. By continuing to browse, you agree to our cookie policy.