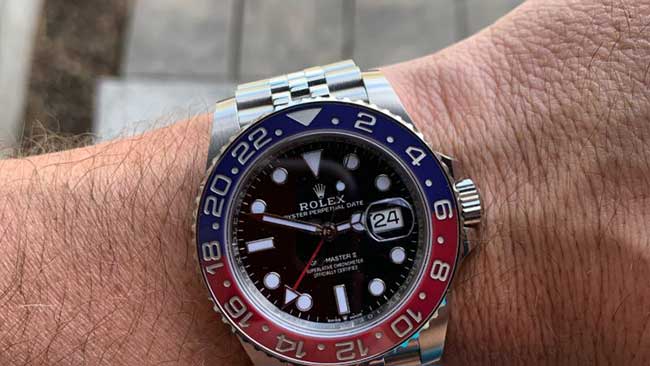 Founded in 1905 by Hans Wilsdorf, Rolex has been an internationally recognized name for over a century. Rolex is the leading producer of luxury wristwatches for men and women with one of the most innovative watchmaking techniques in existence.

The company was originally called Wilsdorf & Davis, but it changed its name to Rolex when it became clear that Wilsdorf wanted his watches to surpass all others. For decades, Rolex has been manufacturing the finest Swiss-made timepieces.

Rolex watches are symbols of prestige, beauty, accuracy, and reliability. It has become one of the most powerful symbols of wealth because someone with a Rolex watch is not flashy or ostentatious but knows that they have a timepiece as accurate as the sun itself.

The Release of an Icon

Rolex teamed up with Pan Am in 1954 to develop the GMT Master. They set out to create a watch that would serve both pilots and frequent travelers. The GMT Master was created as a result of their collaboration. GMT stands for Greenwich Mean Time, which is observed at Greenwich London and defines time zones across the world. All aviation scheduling had to be done using GMT time. As a result of this, the Rolex GMT Master became an essential tool for both aviators and frequent flyers. The GMT Master was the first timepiece with a fourth hand and a 24-hour bezel that displayed time in several time zones. It has also become the official watch of Pan Am.

The Rolex GMT Master was based on the original Datejust Turn-o-Graph, which was adapted from their Datejust. It had an updated mechanism, a two-toned 24-hour bezel to distinguish day and nighttime hours, and a fourth hand. The GMT Master’s design only saw minor modifications for many years. In 1956, Rolex swapped out the old Bakelite bezel with a more durable metal one, and in 1959 they added a crown guard.

Rolex also produced a number of style variations throughout the years. The two-tone bezel was originally designed for use in Pan Am’s signature colors, red and blue. Today, this classic variation is known as the Pepsi thanks to a branding switch by Rolex. Since then, the GMT Master has acquired a reputation for its diverse bezel colors, which have been dubbed with various odd names.

The Icon Gets an Upgrade

Comparing the Old with the New

The original GMT-Master was made from 904L stainless steel which was more rugged and affordable. Compare that to the newer model, which is made from 18k white gold and costs well over $30,000. The choice of material has also made the newer pepsi GMT heavier than the original design.

The modern Rolex GMT-Master II also seems to come with a larger face than the original did — its case measures 40 mm in diameter rather than 36mm like the vintage model (which might affect how it fits on your wrist). The new watch has an automatic movement instead of a manual one which can lead to issues when you have problems winding up your timepiece. Although this doesn’t take away from the overall quality of the product, some people may prefer having more control over their own watches.

The new GMT-Master II ref. 116719BLRO has the new Chromalight Display, which illuminates blue for up to eight hours and is therefore ideal for reading in the dark. In contrast, the original GMT-Master went through several luminescent material upgrades throughout its 18-year lifespan. Tritium was used first, followed by Luminova, and finally SuperLuminova.

Rolex has continued to improve the GMT Master II throughout the years. In 2005, Rolex introduced the Cerachrom bezel, which is almost scratchproof and less affected by sunlight exposure. The first completely reimagined version of the GMT Master II, the Reference 116710, was released two years later. It comes with a Triplock crown, anti-reflective cyclops lens, green 24-hour hand, maxi dial, and ceramic bezel. In addition, it includes a new bracelet and movement as well as a Rolex inscription on the inner bezel ring.

The Rolex GMT Master II collection now comes with an in-house Chronometer certified chronometer movement, the Caliber 3186. It’s powered by a Rolex Parachrom Hairspring. Magnetic fields and other jolts can damage most timepieces. This hairspring, which is composed of a paramagnetic alloy, was developed by Rolex to counteract this. It’s 10 times stronger than the average hairspring and resistant to magnetic fields while being ten times more shock resistant than a human hair.

Which is the one for me?

Rolex has really found a way to upgrade the GMT Master in a huge yet subtle way. The biggest difference between these two is the price tag.  The modern Rolex GMT-Master II is significantly more expensive than the vintage model, but it’s also a lot more advanced.

If you’re looking for something that will fit your wrist and looks great without costing too much money, then go with the original GMT-Master! You can find them on eBay or at pawnshops around town. If you want to invest in not only a timepiece but an experience as well — one where Rolex has carefully engineered every detail of the watch — we recommend going with their new release: which is around $30,000+.

The Rolex Pepsi GMT watch is a timeless piece that will last the test of time. The old and new models both have their pros and cons, but you need to decide which one best suits your needs. If you’re looking for an accurate watch with some flair, go with the original design. However, if you want something more expensive or fancy, opt for the newer model instead!