How did Rolex Pepsi get the nickname? 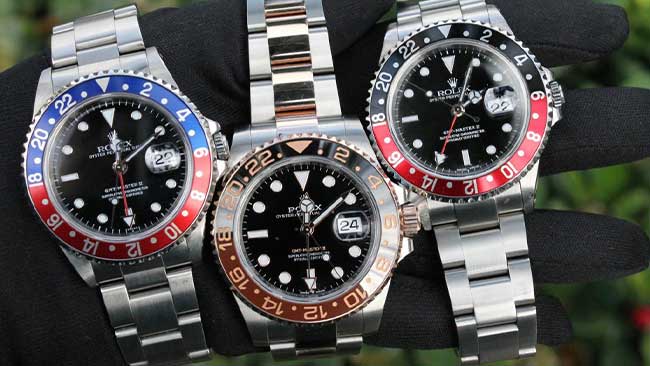 Rolex has an increasing fan base and it is no surprise that they have their own terminology. One amongst these is the popular Rolex Pepsi watch which more formally is known as the Rolex GMT Master II. Even though Rolex Pepsi is just a nickname and has no authorized identity, you are sure to meet these more often if you’re doing a search on Rolex watches or are looking to purchase one.

Now the question is, how and why do these Rolex watches have these funny names in the first place? To answer this question, we will have to go back to the 1950s when this watch was just being designed as a draft. Rolex was introduced in the early 1900s and within half a century it had been recognized as a famous, quality-based best-seller all over the world. On one certain occasion, Pan Airways, a popular airline had come to these manufacturers and proposed the thought of having a watch that is able to show times of two different timezones at the same time. Obviously, Rolex responded to them by designing a watch that today is known as the GMT Master series.

The second in line, Rolex GMT Master II, is very similar in structure and internal design to its predecessor, the Rolex GMT Master I. The only visible difference is in their bezel shades. Yes, the second master has a color of blue and red instead of having black and red. You might have guessed by now that this is the Rolex ‘Pepsi’ we are talking about. Well indeed, it is! And you know why- it’s because of the colors red and blue. If you’ve seen the Pepsi logo, you can see that it too has red and blue colors. Apart from having a colored bezel, this watch stands out to be one of the most sold watches in Rolex’s history perhaps due to its functionality and smart looks. Another thing to note could be that this model is available both with and without a date platform so if you think Rolex’s date area makes your watch look smudgy and unsymmetrical, be free to try the no-date model!

One of the GMT Masters, preferably named the GMT Master I is said to have a bezel, a circular dial-like object that can be turned to set a dual time zone, that comes in a red and black shade. This one has a nickname of ‘Coke’ as it matches the ‘Coca Cola’ theme colors. This watch was based on steel manufacture so most of its parts were designed to have steel plates on them. Back to the colors, the fan base termed this as ‘Coke’ to help them picture the sweet, dark liquid found in a plastic bottle that wore a red label. In 1983, when the watch was released for the first time in markets, it got names like ‘Fat Lady’ and ‘Sophia Lauren’ due to its large case size. Though there tend to be more names for this, the ‘Coke’ is one of the most used phrases.

The Rolex GMT Master 16753 that came out later in the 1980s has a light brown textured bezel with some creamy shades on top of it. Can you guess the name of this? Well, it’s the Rolex root beer watch. Interesting how the colors of this bezel go so good as being described with root beer. Next time you’re having this drink, you can always picture how that watch looks like!

Another successor of these legendary masters is the ‘Batman’ one which too has a bezel only this time it’s blue and black in color. It is a wonder how the nicknames had changed from being mere beverages to an action superhero however, you can’t name a drink that has these color combinations so it’s fair to let ‘Batman’ take this round. The thing that is extremely special about this model is that the steel case comes with added strength and slickness that made it one of the top sold watches of all time. Blue on black goes well too, doesn’t it?

There are other watches nick-named after the color of their bezel. One of the common ones is the ‘Hulk’. Again based on a Marvel superhero, this model has a deep, bright green bezel that resemblances some monster eyes. Its successor, the Rolex ‘Kermit’ too has a green ring around the dial resemblances the puppet frog in the famous kids show named Kermit. The green shades are different though; Kermit has a basic green color whereas ‘Hulk’ is a little more to the royal and serene green type. You can call that bottle green if you’d like to!

The Rolex bezels mentioned above are bidirectional which means you can choose to rotate in both directions to set your time zone. These are commonly made with a 60 minute, that is, an hour scale. Most models have this ring made with stainless steel or aluminum but you can find gold ones as well. One time Rolex started this trend of ceramic bezels which soon declined in popularity as colors such as red or green couldn’t be made to look sophisticated on a ceramic plate.

Apart from giving names based on the color of the bezels, the Rolex fan base has created ‘Thunderbird’ and ‘President’ Rolex models that they judge according to the Datejust model features.’ Thunderbird’ is presumed to be addressed as such because of their golden streak across the wrist belt. It is too yellow to be ignored so ‘Thunderbird’ it is!

It is true that all Rolex watches are based on quality material but do you know what makes Rolex stand out from the rest of the world’s watch companies? Well, it is their intricate design and attention to detail that make every single piece in their collection a masterpiece! Apart from that, their logo symbolizes royalty which is a great addition to their fantastic designs. Whatever you choose, ‘Pepsi’ or ‘Coke’, you know it’s worth your money! Anyways, we hope to see what other nicknames come out in the following years. Till then, cheers!