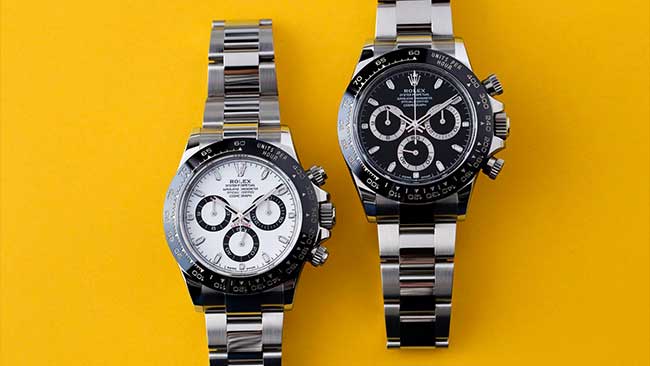 History of Rolex and Motor Sports

Motorsports and Rolex watches have been linking together for over 100 years. In 1902, with the launch of the first-ever Daytona races, Sir Malcolm Campbell wore an iconic Rolex Oyster. In this race, he broke the land speed four times. These record-breaking accomplishments changed the racing world forever. To honor that day, Rolex named their racing watch Rolex Daytona. So, Rolex Daytona is the first-ever Rolex racing watch in history.

In 1932, Rolex was able to link with the racing industry successfully. At Utah, Sir Malcolm Campbell broke the 300mph mark for the first time. This event was held in 1935, and he wore the Rolex Oyster watch with pride for this history-making occasion. Also, the Rolex Oyster Perpetual watch was inspired by the classic Oyster watch.

Rolex produces this model from 1954-1961. With three sub-dial configurations and a matching case, this Rolex Oyster Chronograph Model is a classic timepiece. This model runs on the Valjoux movement introduced before the Original Daytona model, which was the main reason it was called a Pre Daytona. Even Enzo Ferrari wore this Pre-Daytona model.

After the Pre Daytona models, in 1963, Rolex released the first-ever Daytona model. This new Daytona model was indeed a racing watch. It came with Valjoux 72 movement and a three-dial design.

After the Pre Daytona model’s success in the racing industry, Rolex made this first-ever Daytona model for the racing world. First, this model was called Rolex Le Mans. But, to inspire the racing community, they change the name to Rolex Daytona. This name change was made official in 1964.

The Daytona model received a mixed reaction from the general population during its launch. Hence, it took some time to make its mark on the racing world. In 1983, Paul Newman started to wear this watch. It was a gift from his beloved wife. With this, the popularity of Rolex Daytona grew remarkably. This Paul Newman’s watch was later auctioned for $17.8 million in 2017. This watch is considered to be the rarest Rolex Daytona watch in history.

Since then, the popularity of the Rolex Daytona watches has never dropped. It was the go-to watch for most of the race drivers in the modern world. Currently, Rolex produces roughly one million Daytona watches per year. And for a qualifying client, he will have to wait for 1-3 years on the waitlist to buy these precious watches.

Evolution of the Rolex Daytona Watch

After 20 years, the Rolex Daytona model has been recognized as a racing watch by the racing world. This watch was the first generation of Daytona watches. In 1988, Rolex released the Daytona Model 16520. This watch is equipped with automatic movement from Zenith. It was the second generation of Daytona watches. So, most people know this model as Zenith Daytona. This watch received good feedback upon the first release with a 38-40mm case diameter and sapphire crystals.

Until the year 2000, Rolex followed up with this 16530 model. At the beginning of 2000, they release the Rolex Daytona Model 116520. This third-generation watch is equipped with an in-house movement. This watch was far better than the earlier release and an excellent choice for racing.

If you are looking for a Rolex watch, here are some of the best options for you.

As we discussed earlier, the history between Rolex and motorsports is over 100 years old. In 2013, Rolex became the official global partner for Formula One. Here are some of the famous race drivers that wore Rolex watches during their races.

So, what is the key takeaway which you have got from this blog? Well, if you are looking for a racing watch, Rolex is the best choice for you. With its rich history and popularity, Rolex has become one of the most iconic brands in the wristwatch industry. Rolex will undoubtedly hold its position in the near future without any concerns.