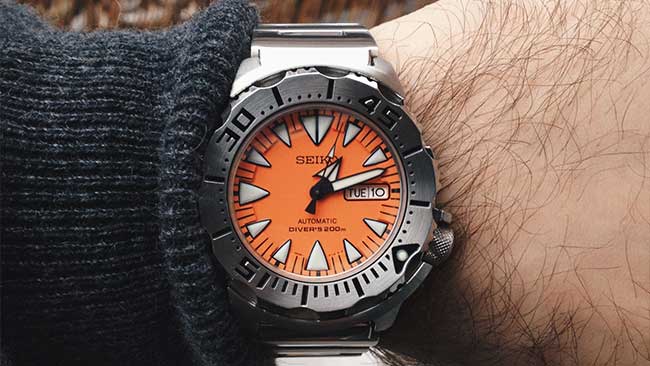 Introduction: A little bit about the Seiko Orange Monster

The Seiko Monster was the name of a series of dive watches that the company started back in the year 2000. Characterized by the rough and tough design and the vibrant-colored faces, the Seiko Monster was something of an icon in terms of robustness and strength. One of the fascinating and special features of the Monster watches was the 200m water resistance. The signature thick bezel and the sturdy construction were ample evidence for this claimed durability.

The Seiko Monster series featured a large variety of different models and editions. Among these variants was the Seiko ‘Orange’ Monster. Like other watches in the series, the Orange Monster was released in newer and revamped versions over the years. These included the 1st, 2nd, and 3rd generations.

In this post, we are looking at the different releases of the Seiko Orange Monster so that you can have a better about the features of each one. This will help you notice and appreciate the improvements that were introduced in each subsequent upgrade. If you are having trouble deciding which one of these you want to invest in, reading this post might help you make a decision easily.

The first generation Classic Orange Monster is where it all began. This generation was the advent of the whole series which was marked by the release of numerous limited editions (such as the Green Monster, Red Monster, and Blue Monster) as well as some others which included the Classic Black Monster and Night Monsters, etc.

There were two main variants of the Orange Monster in the 1st generation. One was the simple Classic design (shown above) and the other was a North America-specific model which had a black strap instead of the signature silver. In terms of other features and specifications, these two were identical. Here is an image of the Seiko Orange Monster North American edition:

Seven years after the release of the original Classic, Seiko released another batch of 1st generation watches by the name of ‘Night Monsters’. This batch had, among others, yet another remodeled Orange Monster. The “Orange Night Monster” was similar to the North American version except that it was completely black, and the inscriptions on the bezel were white.

Coming to the features and qualities of the 1st generation Seiko Orange Monster, the first remarkable thing was the 200m diving capacity. The watch also had an automatic caliber and did not feature the manual winding/hacking that was later introduced in the 2nd and 3rd generations.

The watch had a 42mm stainless steel case along with a Hardlex crystal. For the Classic version, the body had a dominating silver color save for the black numerals on the bezel and the colorful dial. The movement of the Classic Orange Monster featured a 21-jewel mechanism and had a frequency of 21,600 beats per hour.

The 2nd generation of the Seiko Monster series came 12 years after the first release. These watches featured the 4R36 caliber and had the option of being manually wound and hacked. There were two types of Orange Monsters in this generation. One was similar to the classic design (with a silver body), while the other was an Orange/Black hybridized version. Although the latter was not strictly ‘Orange’, it did feature a considerable amount of the color in it, hence the reason it was discussed here.

The Seiko Orange Monster 2nd Generation had the same 42mm case as the previous one and the construction was similarly done with stainless steel and Hardlex.

One of the main differences in the 2nd generation Monster was the styling of the indices. Each index had a triangular, pointed shape unlike the somewhat rectangular ones on the Classic Orange Monster. Similarly, the numerals indicating the seconds were also removed from this version and the dial was made more minimalistic. The movement of the 2nd generation watches featured 24 jewels, which was a bit more than the jewel count on the first model.

When put side-by-side with the 1st generation Orange Monster, it can be seen that the dial is the main differentiating factor. The 2nd generation watch had a deeper orange color, and the indices were sleeker.

The 3rd generation Seiko Orange Monster was released two years after the 2nd. The watch featured a 6R15 automatic movement and had a power reserve of 50 hours. This power reserve was significantly larger than the 1st and 2nd gen. models.

The 3rd generation Orange Monster also featured a manual winding/hacking mechanism that was first introduced in the previous release. The movement had a jewel count of 23 and worked at a frequency of 21,600 beats per hour.

The dial of the watch is also a point of interest. Although the 2nd generation version had changed the look a bit by sharpening the indices, the 3rd gen. Orange Monster went back to the rectangular-like appearance that was seen in the Classic. However, the second numerals were not re-introduced.

The 3rd generation also came with a model called the ‘Orange Sunburst Monster’. The working and features of this one are identical to the normal Orange Monster, but the dial has a different two-toned color.

The actual construction of the crystal and the body remained the same throughout the generations. The 3rd generation watches featured the same Hardlex and stainless steel design as the previous versions.

The Seiko Orange Monster series featured some exceptionally aesthetic and robust watches. As newer generations were released, there were different upgrades and changes to the working and mechanism but the overall appearance remained more or less the same. The bezel of the Seiko Monster watches may appear gargantuan in comparison to other sleeker timepieces, but the justification of this design lies in the 200m deep water resistance. While the standard water resistance depth is generally 100m, these Monster watches give you twice the capacity while simultaneously maintaining a look of burly charisma.