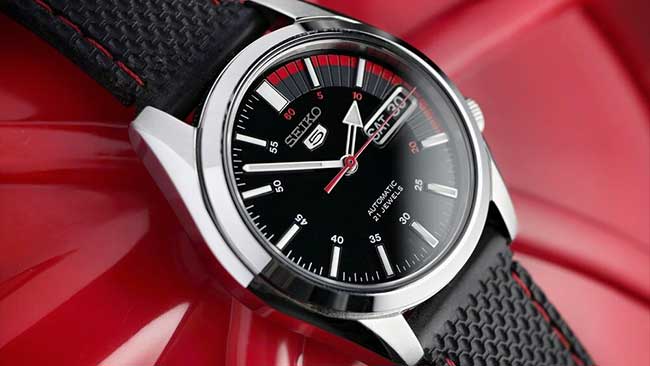 Anyone who loves car racing and other racing sports would tell you that racing and racing watches cannot be separated. Today and even in recent times, racing watch has been influenced by car racing because timing and speed go hand in hand.

Seiko is a brand that emerged from a young man’s shop in Tokyo, Japan, starting at first as a watch repairs shop. Kintaro Hattori, the founder of this great brand, gradually began to make clocks and progressed to create more and better timepieces.

Today, Seiko has made some of the most impressive watches, especially for racing sports, timing, and accurately measuring distance. The great thing about Seiko watches is that they are not as costly as other brands, yet they have features and abilities equal to the more ‘refined’ brands.

The Seiko Chronograph was first released in 1964, and it was no ordinary racing watch because it was the first wristwatch to function as a stopwatch in Japan. That year was significant to Seiko because it acted as the timekeeper for the Olympics, which was hosted by Japan that year.

This model was created with a silver dial, having uniform second, minute and hour hands, ticking gracefully. The head is about a 37-millimeter steel case with a metal bracelet, and its lug is as wide as 18 millimeters.

The Seiko Chronograph, 1964, is one of the classics, setting the pace for other racing watches even when Japan was recovering from war.

The Seiko Caliber was released in 1969, and it was the first chronograph watch to wind automatically. Not stopping there, this watch also had a clutch that was carefully placed upright to make more accurate stopwatch records.

The Caliber model has a column wheel and serves as an excellent racing watch because of its preciseness in timing. It made waves when it was first produced and sold mainly as the first racing watch with these features.

The digital Seiko is particular because of many reasons, the most obvious one being its time display; it digitally tells the time, showing the hour, minute, and changing second. It is also a good racing watch since it shows time digitally, easily grasped at first glance.

Also, this flexible racing watch can store and record lap times which is very helpful, especially to swimmers and divers. Of course, the watch is sealed and unharmed by water.

The wearer can use this racing watch even in the evenings because of an inner light reflecting the digits.

In 1983, Seiko shocked the world again by creating a master watch that could record voice for about eight seconds. It was clear that watches were going to the next level as far as Sheiko was concerned.

The Seiko Voice Note is a good enough racing watch because it not only records and sets a time, it contains information the athlete inputs as a reminder or whatever he pleases!

It has a steel bracelet that matches nicely with the head design.

Beauty is what you see the first time you come across a Seiko Kinetic, and you will fall in love at first sight. A remarkable fact is that its wearer’s body activities power the Seiko Kinetic watch! What a deserving reward after a workout or a good morning run that was timed by, you guessed it, the same Seiko kinetic racing watch!

Multi-tasked to keep its owner fit and well-timed, the Kinetic is the ideal racing watch you could ever ask for. Some models from this series have a white dial on a 4emm diameter head, with nicely shaped subdials, cut out differently from the usual circular shapes to display day and date.

Like the Cal.9T82, others are silver plated with a regal head, carrying subdials that stand out as is typical of a good racing watch.

Especially useful to swimmers and divers who want to train themselves in keeping to time and increasing speed, the Scuba Master, as the name suggests, is the best racing watch for aquatic racing sports.

With a knack for lasting long and working well underwater, this racing watch also displays how deep the water is and times the diver’s progress from the moment he dived in.

Digitally displayed, the watch has sensors that work well in water.

For a racing watch brand to grow and maintain a good name, it has to make quality watches that can withstand specific pressures, last for a long time, and function properly. Accuracy is vital for a racing watch.

Seiko is a brand that has constantly stood by these principles, improving every time it releases another work of art. The Grand Seiko is a racing watch that is sure to boost its wearer’s confidence because it has not only built a respected name for itself but has also increased over time in its tech strength and water resistance.

An athlete needs to trust in his racing watch. The watch has an internal power source that can last for about eight days, increasing trust. A racing watch is what a nurse is to a doctor; you can call Grand Seiko the right-hand racing man.

The Spring Drive can boast of its superior power to measure time gone by to the last second. This high-power racing watch can function as a timer, and it has a unique inner working that allows you to press the start button when you want to begin timing without affecting or delaying the record.

It has a steel case of about 44mm width with a lion logo behind the case. Valid for any racing sport, whether land or water, the Spring Drive is a hybrid racing watch that can withstand water, just like most Seiko racing watches.

Its distance measurement has thirty minutes and twelve hours.

Seiko Spirit has a face diameter of 41mm, stocked with an alarm system, date window, and distance measurement. Spirit is a racing watch that both athletes and you can use! It comes with a stainless-steel bracelet and a lug width of about 20mm, so it is balanced as it sits on your wrist. Yet another one of Seiko’s most outstanding achievements, the Seiko Spirit, is a trusted racing watch.

By now, you must be used to Seiko being the first inventor of watches with mind-blowing characters. Seiko Astron is the first racing watch with a GPS implant and waits for it… charges from sunlight! What more could an athlete want?

The Astron has you covered as soon as you change location, quickly adjusting to your location’s time while showing your home location time.

Holding fast to Seiko’s goal of growing into the future, this fantastic racing watch, with its cool dial colors and carefully designed hands, Seiko Astron has come to stay, forever leaving a mark in the watch-making business.