7 Watches on the Moon and in Space Missions 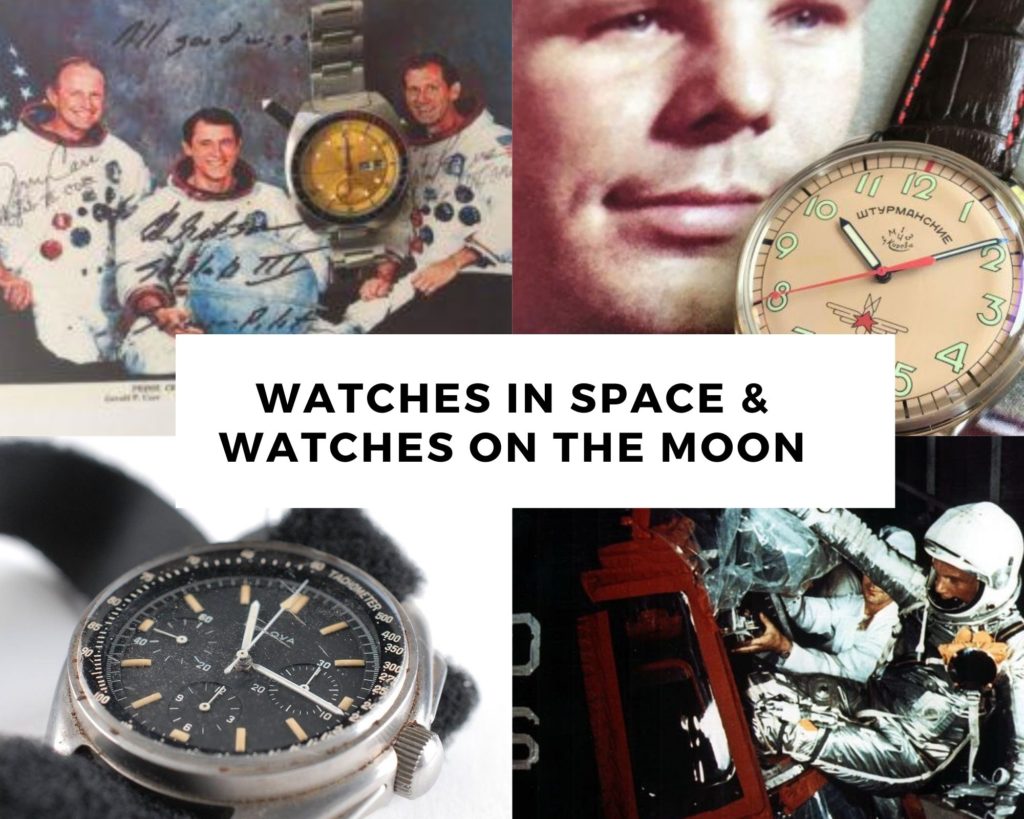 It’s an out of this world prospect to know how far technology has travelled. From the first watch in space to the iconic watches on the moon. There has always been a special chronometer by the side of every traveller. Each watch bringing giant leaps for mankind and taking them home. In fact, there are 7 particular timepieces that have made their mark on history of moon landing and space travel:

On April 12th, 1961, Yuri Gagarin made history for horology. He became the first man to enter space meaning his watch was the first watch in space.

The Soviet Sturmanskie roughly translates to ‘navigator’. And, was actually the spaceman’s own belonging. He procured the watch after graduating from the Orenburg Flight School in 1957.

The standard Sturmanskie of the time of Gagarin’s graduation was a simple 38mm manually winding wristwatch with 15 jewels. Which, in turn, suits the time of the Soviet’s socialist state and democracy.

While not the first watch in space, this is the most famous. Buzz Aldrin wore his NASA approved watch on the US Apollo 11 mission in 1969. Not only did it stand the test of space’s vacuum, but it also landed on the moon.

The watch was a gift from NASA.  They searched for specific watch functions calibrated to stand a series of tests. Then they could become a NASA approved watch.

The original Moonwatch watch was the 42mm Omega Speedmaster Professional 145.012. It had a Tachymeter and Chronograph. Unfortunately, it isn’t available in the Smithsonian because it became lost in transit.

As the first American man to orbit the earth, Glenn made history while he wore his TAG Heuer. Interestingly, this timepiece was actually a stopwatch unlike standard wristwatches we see today.

Glenn wore the TAG Heuer model 2915-A strapped to his wrist using glue and an elastic band. And, it was upon the Mercury-Atlas 6 flight where the watch and the wearer made orbit.

On March 18th, 1965, Russian astronaut Alexey Leonov took a step further than Yuri Gagarin. This is because Alexey was the first space traveller to exit his capsule and take a spacewalk (or, EVA).

During his time floating in space, he wore the 37mm Caliber 3017 Strela with gold numerals and wedges. At the time, this was a standard watch for all Soviet Air Force pilots, but it become the first watch in space.

After Apollo 11 with Buzz Aldrin and Neil Armstrong, other successful missions followed. One of which, the 1971 Apollo 15 mission, carried Mission Commander Dave Scott.

Omega watches are the standard issue of NASA approved watches on the moon. But, Scott took his Bulova watch with him. This 45mm Bulova Chronograph 88510 came after his Omega Speedmaster popped a crystal. And, it became one of the first watches on the moon that was privately owned.

After his travels, in 2015, Scott decided to pass his Bulova watch over to RR Auctions. During an auction, the watch hammered for $1,625,000.

Bringing in a momentous 342 days in space (a world record) Scott Kelly was sure to take his range of beloved watches. He even took two Breitling watches as well as his NASA approved watch; the Omega Speedmaster.

The most notable was his Breitling Navitimer 1461. The watch included an appropriate moon phase complication. Kelly believed; “Breitling watches set the standard for how a chronograph should perform”. Which is why he took it with him.

Another deviant to the NASA approved watch Omega Speedmaster was Pogue’s Seiko. Pogue decided he would take his personal Seiko Chronograph 6139 with him.

The Skylab mission took to orbit in 1973. And, Pogue took his Seiko because it had a ‘speed timer’ function that his Omega Speedmaster did not. This allowed him to record and gauge the engine burns.

What’s interesting about this watch is that it was the first automatic watch in space. The other watches were the usual self-winding watches of the century. Since then, the yellow-faced Seiko has boomed in popularity. It even gained the nickname the ‘Seiko Pogue’.

Why Is Roman Numeral IIII and Not IV Used on Clocks and Watches?

Rolex Nickname Guide You Should Swear By

A Beginner’s Guide to Buying Your First Omega

Quick Search
Watches less than $5,000 Watches $5,000 - $10,000 Watches $10,000 - $15,000 Watches $15,000 - $20,000 Watches above $20,000 Luxury Watch Reference Numbers
Pre-owned watches Dive watches Gold watches Blue watches Automatic Watches Manual-winding watches Most popular luxury watches models Watches with market price higher than MSRP
Recommended For You See All
Watch Insurance 101: Getting your watch insured
Why Is Roman Numeral IIII and Not IV Used on Clocks and Watches?
A Guide to Storing Watches at Home Safely
Top 5 Tips For Buying Your First Luxury Watch You’ll Love
Getting more articles...
stop
stop
stop
stop
See All
WatchSignals uses cookies to ensure you get the best experience on our website. By continuing to browse, you agree to our cookie policy.