Why Is Roman Numeral IIII and Not IV Used on Clocks and Watches? 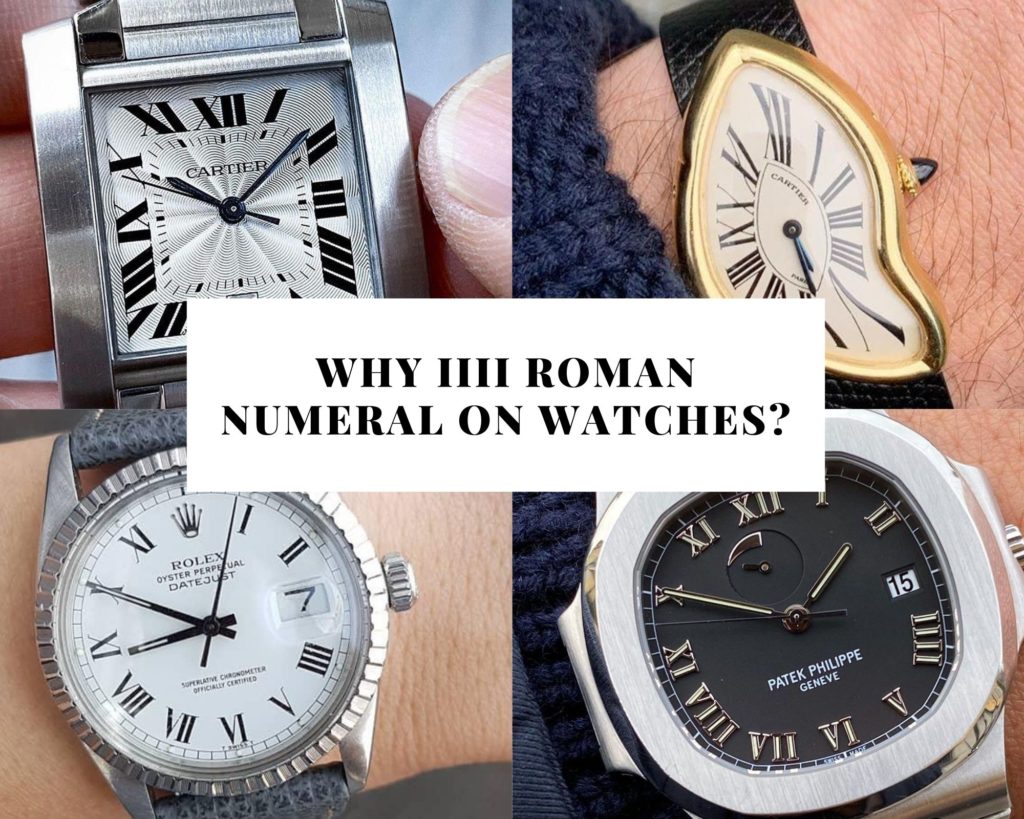 There’s a curious phenomenon that has been occurring for centuries in watchmaking. While many may not notice, others stay stunned with the use of roman clock numerals. This is because they don’t line-up with the history books. Leaving many asking themselves; “is this even a valid Roman numeral”?

The 4th digit on many luxury-and-collectors watches use a “IIII”. Especially strange is the use of traditional Roman clock numerals when Roman numeral “4” is “IV”.

So, we’re all left wondering, why is the “4” in Roman numeral clocks wrong? Here at Watch Signals, we’ve compiled 6 theories from horology-forums to answer it:

The Roman’s used addition and subtraction to make numbers with Latin letters. While they featured “IV” in mathematics, they engraved “IIII” on their sundials.

In fact, it wasn’t until after the fall of the Roman Empire that cultures began to incorporate the use of “IV” in counting.

Ancient Roman’s worshiped Gods symbolising their livelihood. The most chief deity of the Gods was Jupiter; the God of sky and protection.

In Roman, Jupiter is spelt “IVPPITER”. And, many Romans found themselves questioning whether “IIII” is a valid Roman numeral. Wanting to appease their God, they did not use “IV” from Jupiter’s name, instead featuring the “IIII”.

Theory 3: It Visually Balances the Watch-Face

Aside from the historical aspect, when looking at two watch faces, using “IIII” can be obvious. Horologists such as Cartier will use “IIII” instead of “IV” because it is more symetrical.

When looking at a watch, “IIII” is opposite to the number 8, symbolized as “VIII”. While “IV”, on the other hand, does not provide the same visual balancing.

Theory 4: It Is Easier to Read on a Watch-Face

To keep it brief, one of the theories that the Roman clock numerals are “IIII” instead of “IV” relates to simplicity.

Clockmakers in history used the “IIII” numeral to represent 4 as it is a simple representation. And, the many that were illiterate at the time could understand it. Yet, this is not necessarily an issue with a modern world with luxury horology. So, it has become a cultural tradition remaining through time.

One of the most popular reason for the use of “IIII” on clocks is a story about King Louis of France. The tale begins with a clockmaker presenting a timepiece to the King. But, the King did not like the use of “IV” as it clashed with his title as King Louis XIV.

At the time, this was on the verge of the French revolution and stories spread wide across Europe. And, that’s why a clock-face is likely to use “IIII” which would make it not a valid Roman numeral.

While it is a much-loved story, it is de-bunked with older timepieces also featuring the Roman clock numerals “IIII”.

Theory 6: Using “IIII” Was Easier for the Lazy Clockmaker

Finally, as many watch-enthusiasts do, we have a favourite theory: The lazy clockmaker.

This theory relies on the stamps and ease. When clockmakers used stamps to manufacture a watch-face, “IIII” makes for fewer stamps.

In this case, a watchmaker needs only 3 stamps with 4 digits. The first cast would have “IIII” and each of the digits would print 1 to 4. Then, they would have another stamp with “VIII” to account for digits 5 to 8. Their third stamp would be “XIII” to make numbers 9 to 12 where the “XI” can flip to make “IX”.

Whereas, if a clockmaker were to feature the “IV”, they would need a 4th stamp. Hence, the lazy clockmaker.

Either way, no matter the theory or the reason behind it all. The “IIII” is a valid Roman numeral. And, because of its adoption in the horology industry, the use of “IIII” has been dubbed ‘The Clockmaker’s 4’ and ‘The Watchmaker’s 4’.

But, there are some exceptions to the Clockmaker’s 4. The most famous examples of normal Roman clock numerals being London’s Big Ben and Michigan’s 1870 Colonial Clock Company.

Which theories do you agree with? Please let us know in the comments below.

A Beginner’s Guide to Buying Your First Omega

The Beginner’s Guide to Buying your First Patek Philippe