What is a chronometer & COSC certificate? 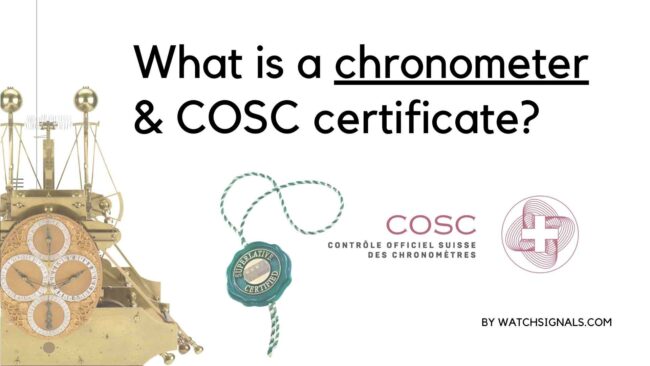 Introduction to chronometer and COSC certificate

First of all, a chronometer is not the same as a chronograph watch. A chronometer is a specific timepiece that has an official COSC certificate, which means that the movement is accurate -4/+6 seconds a day if it is a mechanical watch, or +/- 0.07 (at 23 degrees celsius)  /-0.02 seconds (between 8 and 38 degrees celsius) a day in the case for a quartz watch. On the other hand, a chronograph is a sports watch (quartz or mechanic) with the complication of a stopwatch and usually a tachymeter.  Now when we made that clear, let’s see a brief history of a chronometer.

History of the chronometer

The first question is where did the term chronometer come from? The term we are using today is mostly based on the marine chronometer. To determine a position on the Earth’s surface, it is necessary to know 3 things: latitude, longitude, and altitude (but the last can be ignored for vessels operating at sea level).  For celestial navigation, you can use the stars to figure out what your latitude is, but you can not figure out what your longitude is, or put in other words, how far east or west did you get from your destination. The key is to know what time is it on the boat. Let’s say that you know what time is in Dublin accurately and you know what time is locally on your boat somewhere in the middle of the Atlantic ocean, the difference between two times will tell you where your position is. As the Earth rotates at a predictable rate, the time difference between the chronometer and the ship’s local time can be used to calculate the longitude of the ship.

At the beginning of 18. th century British government offered a prize of 10,000 to 20,000 British pounds for a method of determining longitude at sea.

The problem was solved at the fourth try by Mr. John Harrison who invented the first chronometer watch in 1761. The H4 (how he called him because it was his fourth try at making a valid chronometer for the sea) was a 5-inch pocket watch!

What is a chronometer in the watch world today?

Talking about chronometers today, the first thing we think of is COSC certification. COSC is an acronym which standards for Contrôle Officiel Suisse des Chronomètres. This body has authorization for certifying the precision and accuracy of high-end watch movements. It is a Swiss non-profit organization that tests swiss made chronometers, which was founded in the year 1973 by five watchmaking cantons of Switzerland: Bern, Geneva, Neuchâtel, Solothurn, and Vaud, together with FHS (Federation of the Swiss Watch Industry).

The COSC does not test the whole watch. It only tests the movement itself, and the very process itself will last for 15 days.  Once the movement is delivered to one of 3 COSC laboratories they will run 5 tests on it and judge it by seven criteria: average daily rate, variation in rate, the greatest variation in rate, the difference in rate in horizontal and vertical positions, largest total variation rate, and variation in rate depending on temperature and rate resumption.  In this article we will only discuss the difference in horizontal and vertical positions, so let’s get to it!

First, they will manually wind the watch by following the manufacturer’s instructions (COSC removes the auto-winding mechanism). After that the watch is tested in a few different positions in a period of 2 days per position, 14 days total.

What is then a Superlative chronometer?

Rolex went a step forward. Rolex watches have the title „Superlative Chronometer“ because they guarantee once the movement is put in the watch case, the watch will be accurate in -2/+2 seconds a day.  You can easily see the green seal which symbolizes Rolex’s superlative chronometer.

COSC gets around 1.6 and 1.8 million movements per year, which is around 6% of all Swiss-made watches in the world. In the testing laboratories works around 60 members of full-time staff, and 70 auxiliary employees. According to a report from 2015, three companies that receive the most COSC-certified movements are Rolex (795,716 watch movements),  Omega (511,861 watch movements) and Breitling is the third (147,917 watch movements).

COSC is authorized to issue only one copy of a certificate (the original stays with them), and if you lose your copy, you can only send the movement for a test (and pay again, of course)