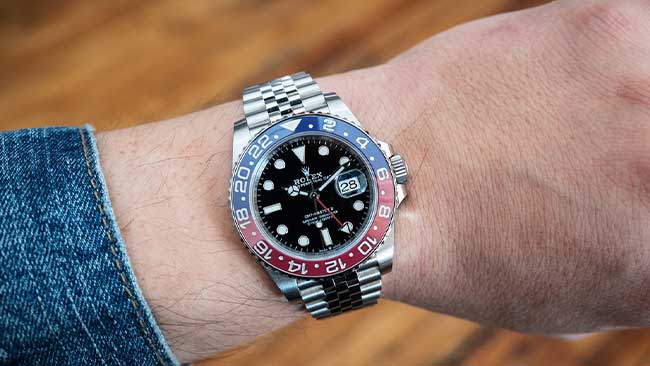 The “Pepsi” nickname is given to the blue and red GMT-Master bezels, which was the original colorway of the first GMT-Master (ref. 6542) launched in 1955.

Many watch enthusiasts see Rolex as one of the best and most popular watch brands out there. Not only is this because of its iconic reputation, but also because of its affordability despite the luxurious vibe and feel it gives off to anyone who sees it.

But why do some call Rolex by different names such as the BLRO Pepsi?

Well, that’s what this article is about. Because here, we are going to show you the different nicknames and aliases people have given to Rolex watches since their inception to mainstream culture.

The Pepsi nickname is given to the Rolex watch that has a blue and red color combination with GMT-Master bezels. This was the original colorway of the GMT Master Rolex watch which was launched in the market back in 1955.

Since then, Rolex has used the iconic red and blue color combination of the watch bezel on various GMT-Master watch lineups over the many years.

The first Pepsi watch was made using Bakelite material. But the company decided to use aluminum to lower down costs and make it more versatile and better suited to more rugged usage.

Rolex then decided to change things up a bit in 2014 to make the Pepsi watch more in line with the modern world. They made it using a different material, in this case, with Cerachrom ceramic.

This can now be seen in their GMT-Master and GMT-Master II watches in addition to their other stainless steel and gold models.

Because of this, Rolex had an influx in popularity especially that they have now started to target the younger generation who are unfortunately becoming further disconnected with iconic watches.

Why is it called Rolex BLRO?

The BLRO is a slang acronym which denotes the French words for the colors red and blue. The French translation of blue is bleu, while red in French is rouge.

They then combined these French words into capital letters, which then led to BLRO. But why blue and red?

Well, that’s because the color theme of Pepsi is blue and red. Although there are no official statements coming from Rolex that they have a partnership with the soft drinks brand, Pepsi.

Since the Rolex Pepsi became popular, there came out a number of alternative watches from the iconic watch brand that people loved to call with different names and aliases.

What’s more is that the original watch has a brown and yellow color to it and was made of premium aluminum. This was elegantly placed and fitted with a two-tone color motif of yellow gold. There was also a steel version of the Rolex Root Beer, but it wasn’t that popular.

Today, Rolex brought back the nostalgic vibe of its Root Beer line as their new Root Beer bezel comes in brown and black color and is already made from ceramic.

This is also fitted to Everose gold with a complimentary two-tone steel GMT-Master II and Everose gold. This has a serial name alias of CHNR which is another acronym for the French words of chocolate and black, chocolat and noir.

Then comes the Rolex Coke that sports the colors of the iconic soft drinks of Coca-Cola. This watch is characterized by a black and red color, which are exactly the same colors you will find on the wrapper and packaging of the Coke soft drinks.

The Rolex Coke came out on Rolex’s first GMT-Master II lineup which was launched in 1983. This was then continued up until the next GMT-Master II reference in 1989. This was also made from either aluminum and ceramic. But unfortunately, it’s not anymore produced today.

There is also the Rolex Clint Eastwood, which was named by Rolex watch enthusiasts in homage to the watch that Hollywood star Clint Eastwood was wearing. This has a Root Beer bezel color combination which was used and worn by Clint Eastwood in many of his movies.

This comes with a two-tone Jubilee bracelet as well as a nipple dial that is characterized by hour markers made of gold and are filled with lume. Many love this watch because of its classic and elegant vibe, but most notably, because it is used by the famous actor, Clint Eastwood.

There were also these so-called Daytona watches, with the most popular one being the Daytona Beach.

This was a huge hit during the early 2000s because it had colorful stone dials that are matched with premium exotic leather straps. What’s great about this is that it is great for active use, such as if you are into sports but you still want to look as classy as possible.

There is also the Daytona C which is very similar to the Daytona Beach. But what makes this different is that it is made of stainless steel and is coupled with a Cerachrom bezel.

This was revamped in 2016 when Rolex launched the all-new Daytona C with two options. Either you choose the one with the black dial, or the other one with the white dial.

With all this being said, you can clearly see that Rolex is one of the most iconic watch brands. It’s not just about the name, but also because of the premium quality, affordability, and ability to make this as a luxury brand that speaks of utmost elegance and class.

The Rolex BLRO Pepsi GMT, and the many variations and aliases given by its fans and watch enthusiasts around the globe are proof that Rolex never ceases to amaze the watch community with its iconic watches.