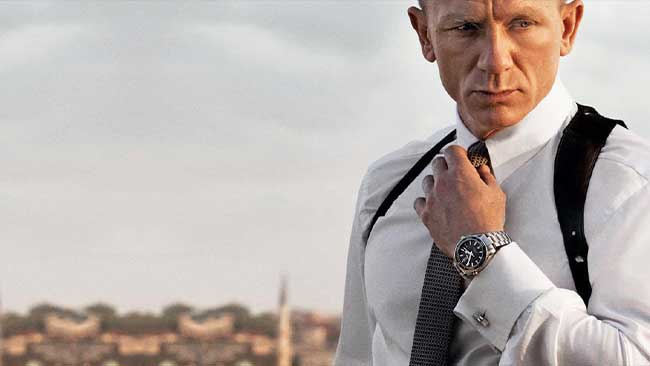 Since 1962, James Bond films have been able to give us unforgettable cinematic memories. The first James Bond film was Dr. No. Since then, it has been a total of 27 James Bond movies. We saw some great performances from actors like Sean Connery, Roger Moore, Pierce Brosnan, and Daniel Craig. With a total of 27 action-packed movies, this movie series has become one of the legendary series in the industry.

When we talk about the James Bond watches, we need to talk about the Omega Seamaster Diver 300Mwatch. In No Time to Die movie, actor David Craig wore this Omega watch. It was specially made for this movie. Apart from that, what kind of watches did the James Bond actors wear in this legendary film series?

Let us find out.

Since 1995, Omega has been the official partner for James Bond movies. But, other brands like Seiko and Rolex are also included in this movie series.

This was the first-ever James Bond movie, and Sean Connery played the super spy. He wore a Rolex Submariner in this first-ever historical movie. This watch perfectly matches Sean Connery’s wrist with a stylish brown leather strap and innovative design. Also, the partnership between Rolex and James Bond movies began with this film.

This was Sean Connery’s 2nd and 3rd movies in the James Bond franchise. Both of these films featured Rolex Submariner watch. With a new and improved fabric strap in the Goldfinger movie, this Rolex masterpiece was one of the signature items of that movie.

In this movie, Sean Connery wore his classic Rolex Submariner to tell the time. Apart from that, he wore a Breitling Top Time watch and used it as a Geiger counter in the movie.

In these 1967 and 1971 releases, Sean Connery wore a Gruen watch. This watch is part of Sean Connery’s private collection.

All three of these Rolex models were very popular at that time.

For his first movie, Roger Moore wore a classic Rolex Submariner and Pulsar LED watch. Towards the starting of the movie of the film, the actor can be seen wearing this Pulsar watch.

In this action-packed thriller, Roger Moore wore two different watches. Apart from Rolex GMT Master, he wore a rectangular-shaped Seiko 0674 LC watch. This was the first time one of Seiko’s watches was featured in the James Bond movie series.

Kaboom! In this movie, the James Bond franchise went all digital. Besides, this explosive charged Seiko M354 Memory Bank Calendar watch plays a significant role in this movie’s finale.

In this movie, Roger Moore wore a Seiko watch. This watch is equipped with a tracking device that shows red dots on the screen according to the target.

History of Omega watches in the James Bond Series

In the mid-80s, the James Bond franchise was not that popular. Hence, they choose Pierce Brosnan as the super spy. It was a positive move for the franchise. With his charming personality and sharp look, Brosnan was able to bring back the franchise to its rightful place. In the 1995 “Goldeneye” movie, Omega was introduced as the official partner for James Bond movies. Since that time, Omega Seamaster Diver 300M watches have appeared in the following film.

Actor Daniel Craig played the leading role from Casino Royale (2008) to No Time to Die (2021) movies. In the ” No Time to Die ” movie, he wore a lightweight Omega Seamaster Diver 300Mwristwatch. This watch was made especially for him, and he helped with most of the design ideas. Here are some specs of this latest 007 Edition watch.

What kind of brand of watch do James Bond actors wear?

Since 1961, these actors have worn various watches, like Rolex, Seiko, and Omega. But, nowadays, the franchise only uses Omega watches.

Does James Bond wear an Omega or Rolex?

In the early movie, the actor wore a Rolex Submariner watch. But after 1995, preference was given to Omega watches.

For this kind of epic movie franchise, they needed an iconic watch for their super spy. That is why this franchise chose Omega. The elegant design and historical value of these Omega Seamaster Diver 300Mwatches are perfect for James Bond Movies. For future movies, they might go with Omega. Or something completely different. Only time will tell.